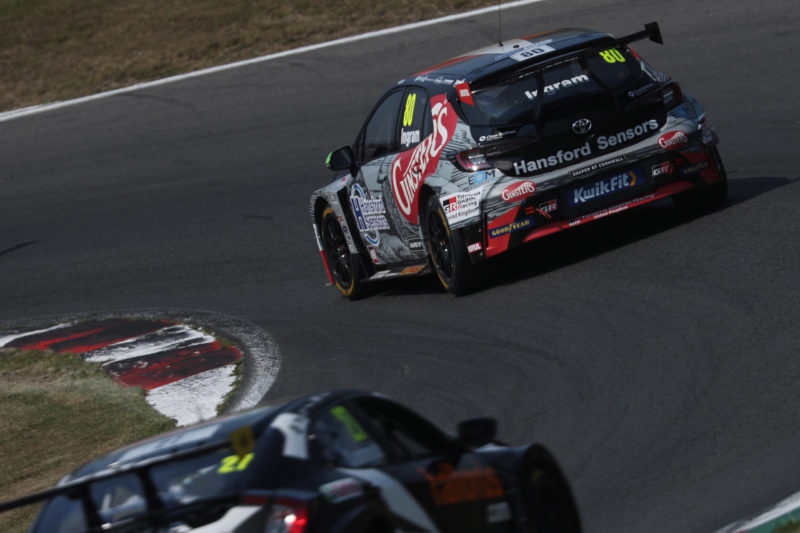 The 2018 runner-up managed fourth in the opening race and continued his momentum in the second encounter, initially progressing to third at the start before dispatching of Ollie Jackson’s Ford with a well-executed cutback move at Westfield.

He then set about pressurising race leader Colin Turkington, but told ITV he knew he would be “dropping off” with tyre wear in the latter stages and was happy to settle for second in the end.

“Absolutely thrilled to get on the podium for the first time this year,” he said.

“I feel like I’ve missed out on at least three of them this year so far, so pleased to get the first one out the way.

“The car felt magnificent, towards the end I was happy just to nurse it really and take the time because I knew that we were going to be dropping off.”

Despite being pleased with second position to collect valuable points, he admitted he felt he didn’t quite have the power to match Turkington’s BMW 330i M Sport where it mattered.

“It was really hard work, especially with the tyres as well. Without sounding like somebody who’s not here, I just didn’t have the power to be able to match with Colin.

“So I was lacking a little bit, but I think generally the car has felt really strong this weekend. So it’s exciting, we’ve had two good solid points scores. The car is feeling pretty hooked up.”

With the top twelve positions reversed for race three, Ingram will line up 11th for the final encounter, which is scheduled to get underway at 17:30 BST.