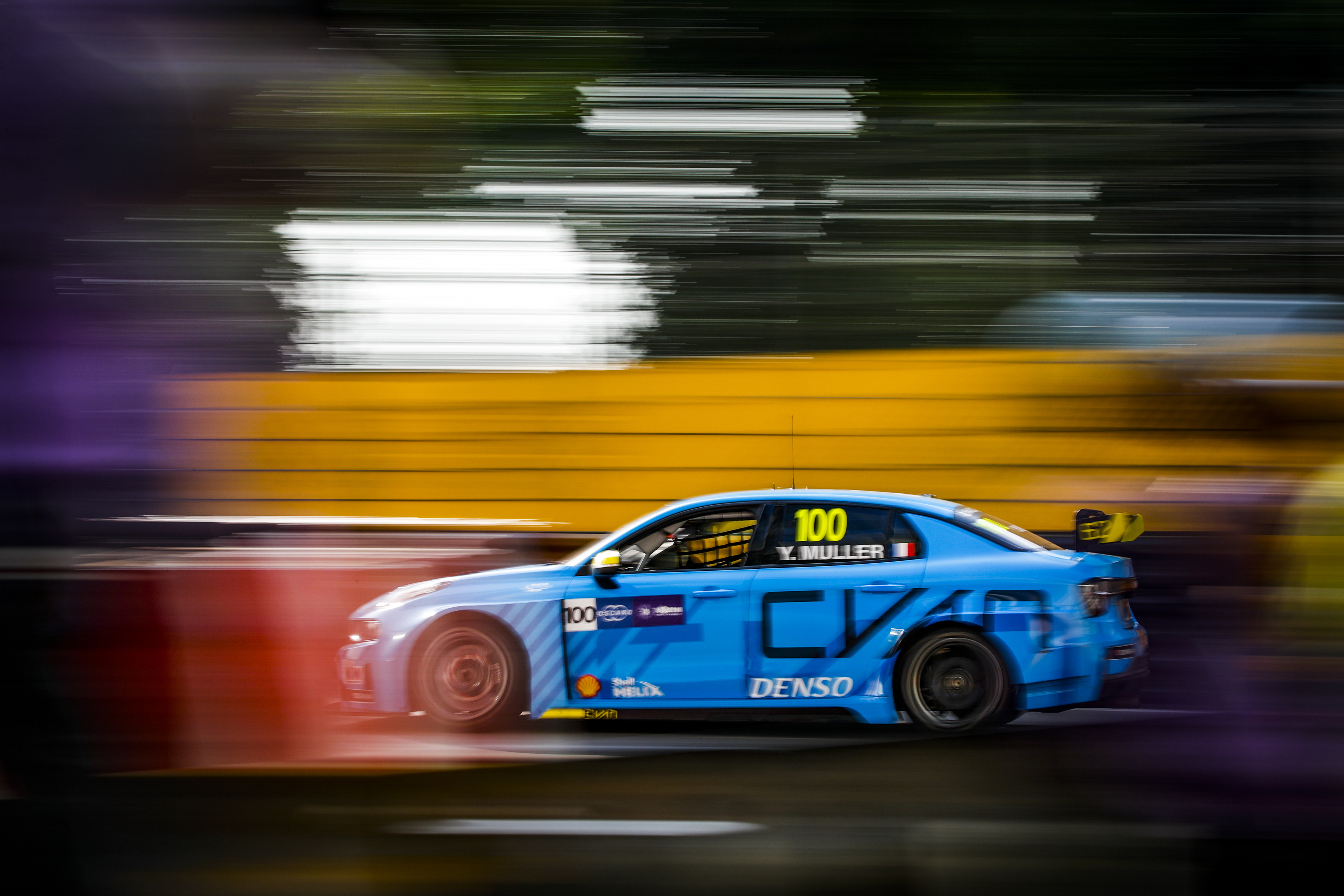 Yvan Muller rose from fifth on the grid to seal victory in the second FIA World Touring Car Cup (WTCR) race at Macau and give his title push crucial momentum.

The Frenchman made light work of a slow-starting Kevin Ceccon at the start, passing the Alfa Romeo Giulietta and Esteban Guerrieri’s Honda on the inside on the run through Mandarin.

That promoted Muller to third in a Lynk & Co 1-2-3, with teammates Thed Björk and Yann Ehrlacher ahead after a level getaway on the front row.

Ehrlacher duly moved aside for his two title-contending teammates as was widely anticipated, but not in the script was Muller’s move to take the lead from Björk on the opening tour of the 3.8-mile Guia street circuit.

An opportunity to retaliate never materialised for the Swede, who took the chequered flag 0.455 seconds behind Muller, the latter banking his fourth victory of the campaign and second of the weekend in Macau.

It later transpired after the race that team orders were responsible for the switch in position at the front of the field.

Victory moves Muller to within 17 points of Norbert Michelisz’s Hyundai – just tenth in this encounter – in the standings; Guerrieri remains the closest challenger, just 11 markers back.

Björk remains in the title frame in fourth, as does Gabriele Tarquini, although his chances of defending the crown remain slim, 107 points back with 135 left in play.

The strong result for Cyan Racing Lynk & Co also moves them a clear 57 points ahead in the Teams’ standings over BRC Hyundai Squadra Corse.

The battle for the final spot on the rostrum ebbed and flowed, with Esteban Guerrieri boosting his own title aspirations after dispatching Ceccon at the start and then impressively diving to the inside of Ehrlacher at Lisboa on the second lap.

That put Ehrlacher out of shape on the exit and down to seventh as Ceccon, Johan Kristoffersson and Catsburg streamed past.

Ceccon’s Alfa mounted a fightback after that disappointing start, lighting up the timesheets before slip-streaming Guerrieri to perfection down the main straight and re-claiming third.

That forced the Honda driver on the defensive from Kristoffersson; the double WRX champion attempted a pass but Guerrieri blocked on the run through Mandarin, and in losing momentum Catsburg leapt up into fifth.

He couldn’t end Guerrieri’s stoic defence of fourth either, aided by yellow flags at Lisboa from lap six onwards as Attila Tassi and Medhi Bennani collided under braking, and dropped back late on to aid Michelisz and Tarquini’s title bids.

Kirstoffersson therefore rounds out the top five ahead of Ehrlacher and Andy Priaulx, his solid drive putting all four Cyan cars inside the top seven.

Frederick Vervisch was eighth in the leading Comtoyou Audi, just over a second clear of WRT Audi racer Jean-Karl Vernay and Michelisz.

Tarquini was next ahead of the selfless Catsburg; Tom Coronel’s CUPRA, race three polesitter Rob Huff (SLR VW) and PWR Racing’s Mikel Azcona round out the top 15.

The pendulum in the title race continues to swing back and forth – the final race of the weekend in Macau is scheduled to start at 03:25 (UK time).