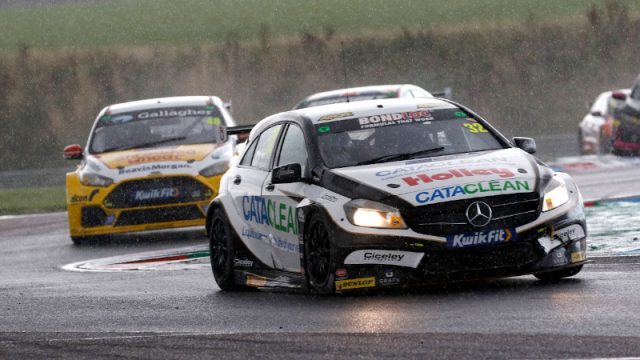 Dan Rowbottom scored his best result to-date in the British Touring Car Championship at Thruxton, with the Cataclean Racing driver finishing 14th in the rain-affected final race on Sunday.

Going into the event, Rowbottom had high hopes after being able to use data collected at the meeting earlier in the year, as well as benefitting from a change in personnel at the Lancashire outfit, as experienced race engineers Paul Ridgway and Steve Farrell joined the team.

Rowbottom, in his first season in the BTCC, qualified his Ciceley Motorsport-prepared Mercedes in 21st on Saturday, setting him up for three races in the thick of the action.

With no retirements in the first race on Sunday, Rowbottom made up one place to take the chequered flag in 20th on the high-speed circuit.

He repeated that result in race two, before making the most progress in the final race, where a late-race rain shower mixed things up.

The Kidderminster racer left the seventh meeting of the year with renewed confidence after the changes in team personnel and his on-track performance.

“Straight away in free practice the car felt more comfortable, but strangely I’m now having to unlearn what I knew and learn about what feels like a totally different car,” said Rowbottom of the engineering changes.

“The track felt different from when we were here in May, as though it is more polished, so actually the data and the feel that I had isn’t as valid as you might expect.”

Reflecting on the racing, Rowbottom was frustrated with how fiercely some of his rivals defended their positions in the races.

“It’s so difficult in the mid-pack because everyone is defending their positions like crazy. It’s a different way of racing because those drivers aren’t thinking of the bigger picture and letting faster cars go.

“They are purely focussed on not giving up a single place and that defensive driving makes it quite difficult, and often dangerous, to get past.

“That said, the car felt great again and whilst I need to find that last fraction in the really high-speed corners, I can’t remember feeling this happy with the car all season.

“The car wasn’t quite where I wanted it to be in races one and two, but we worked on it and it was unbelievable in [race three]! It just got better until the rain came and then, of course, it became a matter of survival on slicks.

“I made a small mistake passing Tom Chilton, so I reckon I could have been 12th or 13th, but after the season we’ve had I’m really happy with that last race.

“It’s the first time I have really felt like I was in the race proper, racing hard and being part of the fight rather than chasing it.

“I’m really pleased with how Ciceley Motorsport has looked at the pace and set-up of the car and the difference that Paul and Steve have made has been instant, so I go to Knockhill much more confident now.