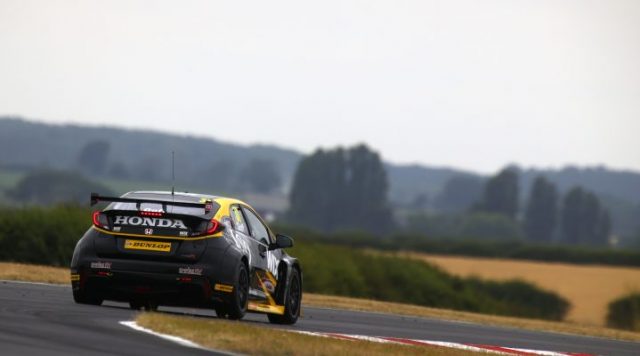 Goff was fastest in the morning session today [12 July] and was not headed for the remainder of the day, with Josh Cook second in his Power Maxed Racing Vauxhall Astra.

Jake Hill, who announced his departure from Team HARD yesterday, produced an impressive performance to go third in the AmD Tuning MG.

Current standings leader Colin Turkington was fastest in the afternoon session, and would manage fourth position, completing the most laps on the second day of tyre testing with 57 tours of the Norfolk circuit.

Adam Morgan completed the top five in his Mercedes, ahead of the Motorbase duo of James Cole and Tom Chilton.

Dan Cammish, who topped the times yesterday, would post a time good enough for eighth ahead of Aiden Moffat, with 2013 champion Andrew Jordan rounding out the top ten.

Reigning champion Ash Sutton was 12th in his Team BMR Subaru, ahead of teammate Jason Plato who was classified 23rd.

Tom Ingram, who currently sits 19 points adrift of Turkington with second in the standings, could only manage 16th fastest.

The BTCC heads back to the Norfolk circuit in a fortnight, with the unique ‘Diamond Double’ race set to take place to celebrate the 60th anniversary of the tin-top championship on the 28/29 July.