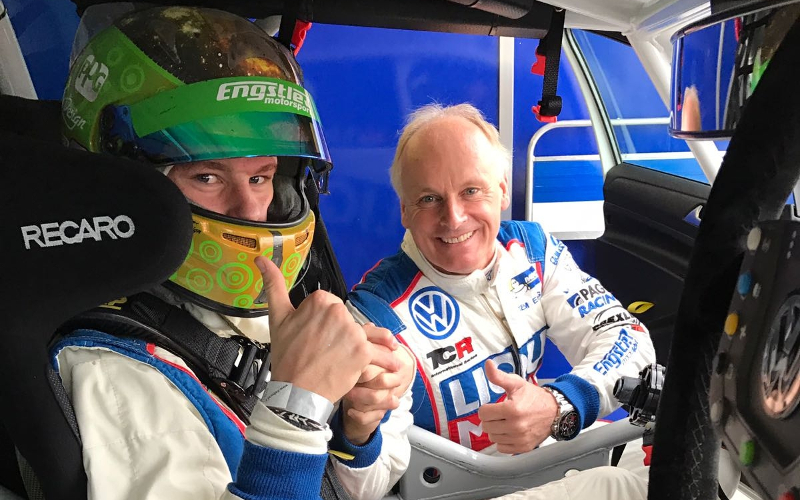 Liqui Moly Team Engstler will enter a car into the opening round of the TCR Middle East series next week, with Luca Engstler to race a Volkswagen Golf GTi in Dubai.

Luca, the son of experienced touring car racer Franz, has already been confirmed as stepping up to the ADAC TCR Germany Series in 2016.

Now the 16-year-old will get some vital practice early in the year next week as he will enter the first round of the new TCR Middle East series, which will be contested over three events in Dubai and Bahrain.

“It will be my first ever race in a touring car and, of course, I am a bit nervous,” said the young Engstler. “But I am also very happy and still can´t believe that my debut will be in Dubai.”

“I am proud to be part of the TCR Family, I think it´s one of the best platforms in automobile sport. The Middle East series will be the perfect training for TCR Germany and my goal is to learn as much as possible during these three events.”

Luca was involved in a recent Liqui Moly driver test at the Adria International Raceway in Italy, and he admits that it was an emotional experience.

“That was one of the most emotional moments in my life! Since I was a child I have watched my father driving in Touring Cars, so testing together with him on the same track and with the same car was an unbelievable feeling. And it was not only emotional; we posted some very fast laps!”

Team Principal Franz Engstler added that racing in the Middle East came about not only due to Luca’s need to build experience, but also as the region is important for the team’s sponsors.

“The Arab Emirates are an economically important market for us and our partners, so for this reason we quickly realized that we need to be at the new racing series from the start,” said Franz. “We have been working with the promoter Marcello Lotti for many years together and therefore gladly go along with him on this new path.”

“I’m really excited to be racing in Dubai for the first time and getting the opportunity to race in the TCR series,” said Gdovic, who has previously competed in NASCAR machinery. “It will be a lot of firsts for me, but I’m looking forward to it and hoping for some good results.”