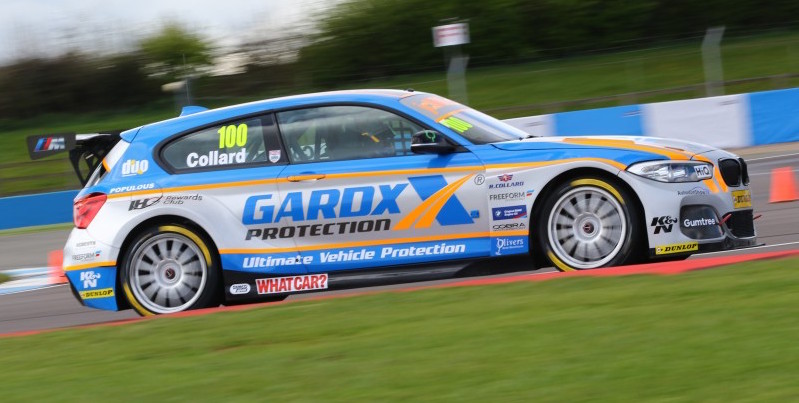 Team BKR’s Arón Smith charged his way to the final spot on the podium from eighth on the grid.

The action got underway with pole sitter Jackson being passed by Speedworks’ Tom Ingram into Redgate for the first time, whilst Team IHG’s Jack Goff moved up into third.

Collard, who was the top finisher on the Dunlop soft tyres, made a brazen overtake into Redgate to slot in behind Goff, whilst the MG pairing of Josh Cook and Ashley Sutton dropped to fifth and sixth respectively.

The first of two Safety Car periods occurred on the very first lap, when AmD Essex’s Ollie Jackson was pushed wide into the gravel, along with Power Maxed Racing’s Kelvin Fletcher suffering the same fate.

Subaru Team BMR’s James Cole was the only non-starter, with his Levorg GT requiring extensive repairs following a fire in race one that forced his withdrawal for the rest of the weekend.

Cole’s Team BMR team mate Colin Turkington became beached in the gravel on lap ten, with the 2014 champion trying to avoid Dextra Racing’s Alex Martin, receiving contact to the right rear of his Subaru in the process which turned him around.

Team HARD’s Jake Hill and Goodestone Racing’s Dan Welch would also retire during the race, with the former having to visit the pit lane several times.

With multiple battles up and down the grid, a battle with Goff and Tom Ingram would finally come to an end with the latter dropping rapidly down the order on Lap 15, as the pair came to blows at the chicane.

Goff would finish fifth, behind defending champion Gordon Shedden, but was ahead of three-time champion Matt Neal, with the Halfords Yuasa drivers forcing their way up the field from 11th and 12th on the grid.

Cook would finish behind Neal in seventh, with Sam Tordoff just behind, as the BMW driver was compromised in the latter goings of the race at the chicane, which saw multiple drivers go through.

Cooks’ teammate Sutton would fall down the order, along with Ciceley Motorsport’s Adam Morgan, with the pair finishing 13th and 11th respectively, having run in the top ten for the majority of the race.

They were two of six drivers running the soft tyre in race two, which also included Eurotech Racing’s Martin Depper, who started last and finished 17th.

Laser Tools Racing’s Aiden Moffatt and Handy Motorsport’s Rob Austin were also in the wars, but completed the top ten after 19 laps of racing.

Team BMR’s very public steep learning curve continues, as both Warren Scott and Jason Plato finished in 19th and 20th at the flag. But with Turkington’s efforts to get the Levorg some more BTCC points in race one of the weekend, the reverse grid for race three could spring a surprise.

The third and final race of the day at Donington Park starts at 17.17 local time, with Mat Jackson leading the drivers standings, and both Neal and Shedden within three points of the Motorbase driver.