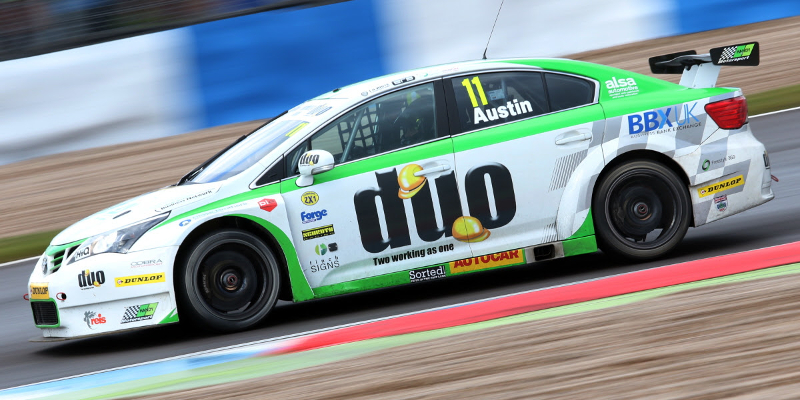 Rob Austin gave Handy Motorsport plenty to celebrate in the British Touring Car Championship races at Donington Park, with his eighth place finish in race three being the first-ever top ten result for the team.

A mid-pack qualifying session saw Austin line up in 15th for the first race, which he was unable to capitalise on and ultimately slipped back to 18th by the chequered flag, in part due to having elected to run the mandatory soft tyre in the race.

Things improved thereafter, though, for Austin, who was able to claim tenth in race two – the team’s first-ever top ten result – before improving even further in race three to take eighth, having earlier missed out on the reverse-grid draw.

“It’s been a frustrating weekend in a lot of ways, but definitely positive with the steps forward we made – especially in races two and three”, said Austin. “Eighth in race three could have been a top five; I took a couple of laps to get adjusted to the changes we made to the car for the final race and I’m a bit annoyed at myself for that. “

Austin elaborated that he could have performed even better in the final race but for a developing issue with his engine temperatures.

“The pace was very good though, being within two tenths of fastest lap, well, you’ve got to be happy with that. In the last race the engine started to overheat a bit, so I had to back it off over the last five laps but the tyres were still very good so we know much more was possible.

“The team worked together better as a unit this weekend and we’ve had better results, so we just need to continue that trend.”

Hand Motorsport Team Principal Simon Belcher praised Austin for the weekend’s results, which have further moved the team forward on the grid in sporting terms.

“It wasn’t the smoothest weekend but we’re all delighted to come away with our first ever top ten in the BTCC,” said Belcher. “To then improve on that with eighth in the final race was fantastic.

“Rob produced some great drives in the races, we know he’s quick and the car is quick and the lap times proved that. It’s been another good step forward.”