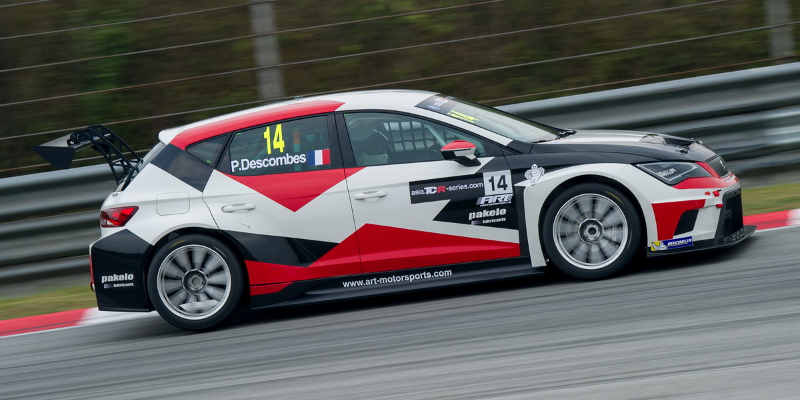 Frenchman Philippe Descombes won two of the first three races of the inaugural TCR Asia Series meeting in Sepang, with Rodolfo Ávila having won the opening race on Saturday.

Descombes, driving an Asia Racing Team SEAT León, continued the precedent set by his team-mate on Saturday to take a double victory in Sunday’s two races.

Second in race two was the lead Honda of Prince Racing’s Michael Choi, whilst the final podium position of the race went to Eric Kwong in the Craft-Bamboo Racing SEAT.

Race three was also won by Descombes, with Kwong going one better to finish in second. However the race was not without its dramas, as Andy Yan, driving the FRD Racing Ford Focus, was thwarted by the same electrical gremlins whilst running in second, which had also plagued him in race one.

The Prince Racing Hondas of Choi and Kenneth Lau also befell mechanical gremlins, which left Kwong, Samson Chan and Felip Clemente de Souza of the Roadstar Racing team to battle for second. Contact between Chan and De Souza put paid to both driver’s races, with Chan later excluded for not serving the drive-through penalty he received for the incident.

Ávila, another ART driver, was replaced by Liu Lic Ka on Sunday due to his commitment to drive in the Porsche Cup.

There was a delay for the FRD Ford team, with Kenneth Ma originally scheduled to team-up alongside Yan in the second Focus. A delay at customs slowed the delivery of the team’s second Mountune engine unit, scuppering the team’s plans for a two-car assault.

“It’s funny how things go,” admitted Ma. “We were so keen to have the first of our FRD-built cars on track, but there’s not much we can do without an engine, so we’ll make sure Andy has the chance to show what the car can do, and we’ll ensure that if we are unable to make the grid for qualifying, that the second car will be more than ready for Singapore in two weeks.”