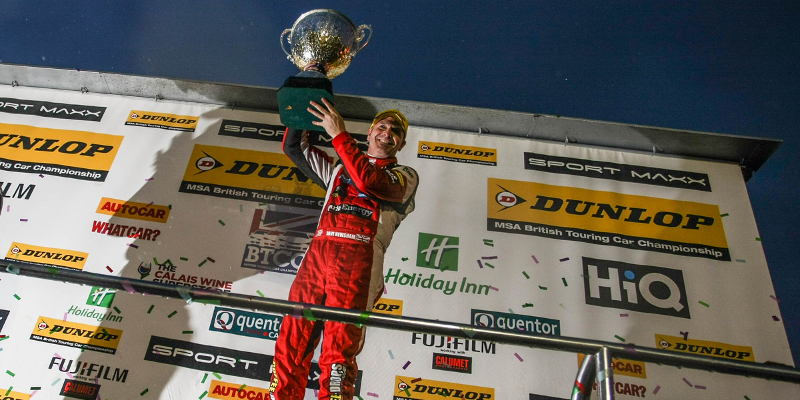 Dave Newsham was elated to have sealed the 2014 Jack Sears Trophy in the final British Touring Car Championship round of the season at Brands Hatch, as he overcame a race one retirement to seal the crown.

Following its introduction in 2013 for cars running to the older S2000 regulations, the format of the trophy was changed this season to be awarded to the driver who made up the most positions from their grid slots over the course of the campaign.

Heading into the weekend, the Ford Focus driver trailed Alain Menu by seven gained positions in the standings, but a dismal weekend for the Swiss meant that Newsham – who retired from tenth place at the beginning of the first race – was able to steal in to snatch the crown, having made up a total of 107 places across the season.

But despite Menu’s problems, which forced him to sit out the final race, round 30 brought treacherous conditions as the drivers battled pouring rain and fading light, and Newsham explained the importance of keeping his machine on the track, with other drivers still in contention.

“It was horrendous,” Newsham told TouringCars.Net. “It just got gradually worse and worse as the race went on. We had the trophy in mind and the guys were keeping me informed so it was just a case of staying on and not doing anything silly. I’ve just found out we lost a lot of boost in there so we were hobbled as well.

“We did [know that Menu wouldn’t start], but Rob Collard and Adam Morgan were still both out there – if we’d have thrown it off, we wouldn’t have won it so it was a calculated race, we didn’t do anything silly. I probably could have gone a little bit quicker but it was just a case of bringing it home.”

Newsham’s 12th place finish in that final race ensure he secured the trophy, and assessing his season, he was delighted to have something to show for his and his AmD Tuning team’s efforts.

“It’s a fantastic thing to win really because it means we’ve overtaken more cars than anybody else in the championship. It’s not something out we went out to win but it’s nice to have done so.

“That trophy says it all. I think it says that we didn’t qualify very well, but we did race very well. It’s been great working with these guys, they’ve done a fantastic job, the car has been faultless pretty much all year – it’s a new car to the team and it’s a new car to me, a new team to me, and it probably just took a little while to gel. We were doing a lot of our testing at the circuit because we don’t have the budget to go testing, so I’d say this year’s been a learning year but I think we’ve set the team in good stead for 2015.”

The 47-year-old’s stint with AmD Tuning means that Newsham has driven for five teams over the course of his four years in the championship, but despite having no confirmed plans ahead of 2015, he hoped to continue his partnership with Team Boss Shaun Hollamby and his Essex-based outfit.

“There’s nothing concrete yet,” insisted Newsham. “I’m going to speak to Shaun  over the next few months and see if we can do it again, that would be nice.

“There could be a second car on board which would be fantastic – every driver wants a teammate to gauge themselves against, to get double the amount of input into the car as well has got to help. Being a one-driver team is not easy when you’re up against these three- and four-car teams when they’ve got four lots of data going in so I think that will be a positive, if we can get a licence.”