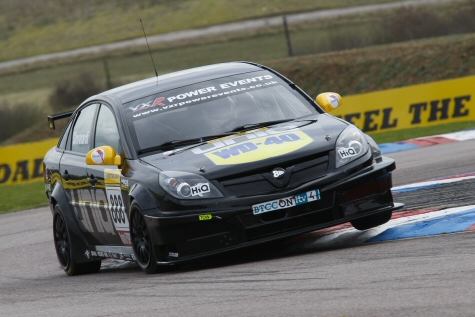 A ‘thrilled to be back’ Fabrizio Giovanardi has set the fastest time in second practice at Thruxton, heading Matt Neal and Mat Jackson.

The second practice session was drier than the first one this morning, meaning that lap times tumbled by approximately 7-8 seconds. This allowed Giovanardi, who is very familiar with the Vectra, to take it to the fastest time seen so far this weekend. The only slight hiccup for the Italian was receiving a puncture late into the session.

“The car is perfect,” said Giovanardi to btcc.net. “It’s great to be reunited with my old friend. We have the pace for qualifying and for the race. I’m not worried about the puncture as we only had two laps to run. It’s now up to me to deliver when it counts.”

The full times from the session can be viewed by clicking this link.

Neal’s second fastest time further cemented the impressive pace shown by the Honda’s in practice so far, whilst Mat Jackson set an impressive third fastest time on his return to rear-wheel drive machinery to be the only BMW racer inside the top 10.