The Deutsche Tourenwagen Masters, or DTM for short, is the leading touring car category in Germany. The championship has been known by this full name since 2000, when it was resurrected in its current form.

The championship had its origins in the Deutsche Rennsport Meisterschaft, which had been running in Germany throughout the 1970s and early 1980s. Then, in 1984, the Deutschen Produktionswagen Meisterschaft was born, which was the original name for the inaugural season of the DTM.

The championship ran under this moniker for the first two seasons, before being re-branded as the DTM in 1986. The full name of the championship then was given as the Deutsche Tourenwagen Meisterschaft.

Increasingly popular throughout the 1980s, the early years of the championship saw Group A cars from the likes of BMW, Rover and Volvo do battle for the title, with a series of weight and tyre penalties to try and even out the competition.

As the championship grew, so manufacturers became interested and in the late 1980s Mercedes-Benz joined the fray, entering formally in 1988 with five teams, after earlier independent efforts.

The late 1980s and early 1990s were a boom time for the DTM, which had cemented itself as one of the most popular championships in Europe. Whilst the late eighties were all about BMW, Volvo and Ford, with the mighty Sierra RS500, the arrival of Audi upped the ante. 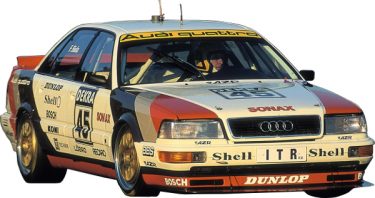 In 1990 Hans-Joachim Stuck took the title in an Audi V8 Quattro at the marque’s first attempt, which was swiftly followed up by Frank Biela’s title in 1991, despite often carrying around the most success ballast. Featuring over 450 horepower, the car was a heavyweight in comparison to the likes of the BMW and Mercedes of the time. Audi also became the first manufacturer to successfully defend its title. But the Ingolstadt marque was not set to stay in the DTM, and pulled out mid-way through 1992 after their crankshaft was declared to be illegal.

Mercedes’ first title didn’t come until 1992, when the legendary Klaus Ludwig took his second title in the Mercedes-Benz 190E. That year also marked the entry of Alfa Romeo, who were the first to build a car to the newly-introduced Class One regulations.

Class One, whilst spectacular, also caused costs to increase. Mercedes built their first Class One car, the Mercedes-Benz C-Class DTM, for the 1994 season and this proved to be the dominant vehicle for the next few years, with Ludwig taking his third and final title in 1994.

In 1995, championship promoter ITR e.V. had even bigger aspirations, and a dual DTM and ITC (International Touring Car Championship) calendar was launched, with seven races in Germany for the DTM and a further five races elsewhere in Europe for the ITC.

Bernd Schneider took the first of his six titles in 1995, winning both the DTM and the ITC, before also winning the 1996 ITC. This was the culmination of a grand rise for the DTM, which by now had even secured the support of Formula One supremo Bernie Ecclestone.

The ITC ultimately proved to be the failing of the DTM, as the costs of the hugely advanced cars, as well as the logistical cost of transporting the huge paddock to countries including Brazil and Japan, proved to be too much.

During the 1996 ITC season Alfa Romeo announced their withdrawal, as well as Opel, who had developed the Opel Calibra V6 4×4 car a few years earlier. Such was the level of technology in the touring car championship at the time that Opel had already developed an all-carbon fibre Calibra for the 1997 season with Zakspeed, but the car never raced…

The withdrawals meant that there was no DTM or ITC in 1997, and the championship fell off the radar for the next three years. It wasn’t until the year 2000 that the DTM was reborn, under the slightly different, and anglicised, but still DTM name of the Deutsche Tourenwagen Masters.

The first year of the reborn DTM in 2000 saw some of the same marques return, with Mercedes-Benz leading the way from Opel, which entered the new Astra Coup model. Audis returned to the grid, thanks to an effort from the privately-backed Abt squad, who entered the small Audi TT.

Many of the leading drivers from the previous era returned, with Schneider, Ludwig, Alzen et al all back on the grid. But it would be Schneider who became dominant in the new championship, with the German taking back-to-back titles in the first two years.

In 2003, Laurent Aïello took the championship in the Abt Audi TT, which ultimately led to Aui giving works backing to the project in 2004, marking their return. Mattias Ekström took his first title that year in the A4, which was also the first for Opel’s new Vectra.

In 2005 Gary Paffett became the first Brit to lift the DTM title at the wheel of a Mercedes-Benz AMG C-Class, but he didn’t return to defend his title in 2006 after seeking a seat in Formula One.

Despite the new DTM being much more cost-effective, Opel withdrew for a second time after 2005, perhaps due to the lack of success for the marque at the time.

The DTM continued with just two manufacturers, Mercedes and Audi, for the next six years, with the rivalry being a particularly bitter one. Things came to a head in Barcelona in 2007, when Audi withdrew all their cars during the race in protest at the driving standards of the Mercedes drivers.

Both Mercedes and Audi fielded up to nine cars during the spell between 2006 and 2011 in an effort to keep the grid looking healthy, with some drivers having to use one and two-year-old chassis as a result.

In 2012 things began to look up for the DTM when new regulations were introduced, attracting BMW back to the championship after a 20-year absence. The Munich manufacturer was immediately on the pace, wrapping up the title with Bruno Spengler and taking the constructor’s championship in the process.

Since 2012 the DTM has consisted of the three main premium German manufacturers, with Audi, BMW and Mercedes-Benz doing battle on a regular basis.

For 2017 the grid will be reduced slightly, after the brands all agreed to reduce their entries to six cars each in an effort to reduce costs further.

The DTM remains firmly a German championship, but has made regular visits to Austria, Italy, France, the UK, The Netherlands and Spain over the years.