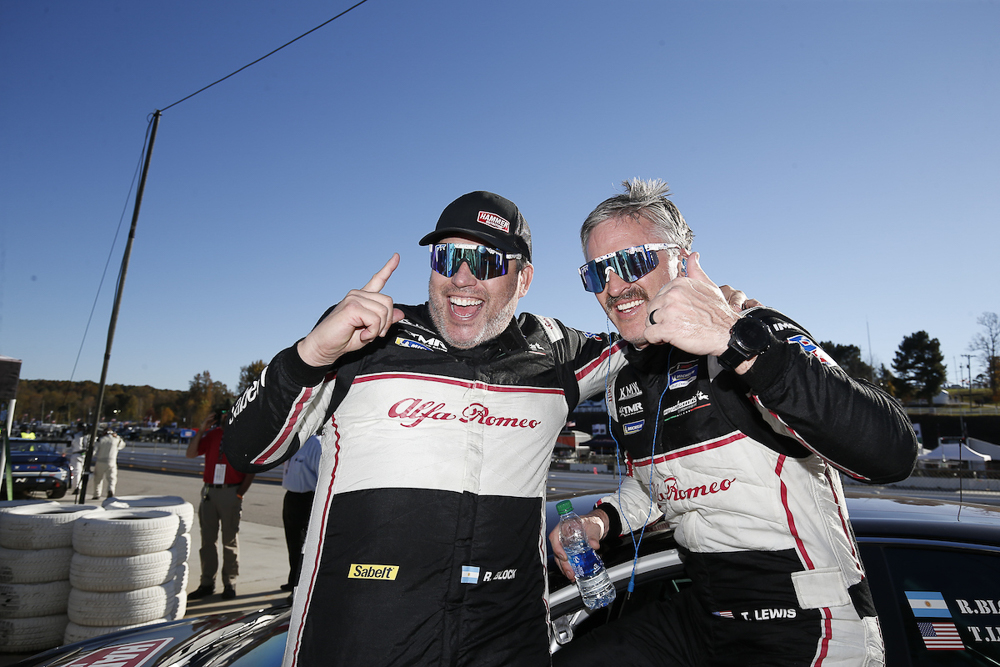 KMW Motorsports with TMR Engineering has taken victory at an incident-laden Michelin Pilot Challenge season finale at Road Atlanta, an event in which Michael Lewis and Taylor Hagler were crowned the series’ new TCR champions.

The two-hour event at Road Atlanta was interrupted by no less than five full-course caution periods – all of which was the result of on-track collisions – which eliminated almost half of the event’s running time. On top of that, and with the TCR field separated by no more than a few seconds as the final 30 minutes of the race go underway, the final podium spots were only confirmed on the very final lap of the race.

The very early going suggested that Bryan Herta Autosport w/ Curb-Agajanian, and indeed Hyundai, was on course for a strong weekend. The pole sitting #98 Elantra N of Ryan Norman and Parker Chase held its advantage into turn one, and quickly started to pull away from from Tyler Gonzalez in the #27 Copeland Motorsports’ Hyundai, the latter having made an electric jump and moved ahead of Harry Gottsacker (Bryan Herta Autosport, #33) at the rolling start.

Norman’s early pace though hit a bizarre hurdle just 20 minutes in when the Hyundai attempted an ambitious overtake of the #71 Rebel Rock Racing Camaro through the Esses. Not quite far enough alongside to make the move stick, the Bryan Herta Elantra nerfed the Chevrolet into the gravel, bringing out the first full course caution. Amazingly, not only did Norman retain the TCR lead after the incident, he somehow escaped a penalty too.

Ironically, the lead two BHA Hyundais, which at one stage led the rest of the TCR field by almost eight seconds, dropped to the tail of the TCR runners during the first round of pit stops when the trio opted to both refuel and change tyres. Among the big movers during this was the Unitronic JDC-Miller MotorSports Audi RS 3 LMS (#17), which, having started on the back row, jumped to the front of the TCR field, ahead of the Copeland Motorsports (#27) after a lightning fast stop.

Albeit briefly: the yellows were back out again almost immediately when the JDC-Miller Audi was tipped into the gravel at the Esses, ironically, by the returning Rebel Rock Camaro. Engine issues eventually led to the battered Audi’s retirement shortly before half-distance. Copeland Motorsports (#27) now led.

Newly-crowned TCR champion Michael Lewis though was the main to watch. Bryan Herta Autosport’s third Hyundai needed only to complete the event’s pace lap to put the crown out of reach. Duly completed by teammate Taylor Hagler, and with the championship pressure now off, Lewis – who also took the TCR title in 2019 alongside Mark Wilkins – now admitted there was “nothing to worry about” and that a win might even be on the cards. Having emerged from the first pit stop in 5th (from 12th on the grid), the Californian had already stormed his way up to 2nd before another full course caution, called when Turner Motorsport’s #96 entry hit the tyre barriers hard on the pit straight, bunched the field back up again.

Ironically, Turner’s collision had a very real impact on another Bryan Herta Hyundai: working his way back up the field after a lengthy pit stop, Mark Wilkins (#33) suffered a big hit as the TCR frontrunners struggled to avoid the spinning Turner Motorsport BMW and the wreckage from the tyre barrier. A hefty punt ended up dropping the Hyundai one lap down while its rear end was repaired.

With one of Bryan Herta’s Hyundais now shuffled back in the pack, that left the door open for KMW Motorsports’ Tim Lewis (#5) to start a charge of his own heading into the final 30 minutes. A stunning turn of speed saw the Alfa Romeo Giulietta Veloce first dispatch Copeland Motorsports for 2nd and then the leading #77 Hyundai. One late-race dive from the #27 Hyundai aside, the Giulietta led all the way to chequered flag to secure the team its second win of the season.

An astonishing battle for the final podium spots eventually saw Atlanta Speedwerks (#94) come out on top ahead of Copeland Motorsport on the very final lap of the race. A late-dive down the inside of Lewis into turn six sent Tyler Maxson onto the grass at turn seven. With a run down the back straight, then 3rd-placed Michael Lewis (#77) tried a move around the outside of the back chicane only for contact between the pair to send the Bryan Herta Autosport Hyundai across the grass. With both Maxson and Lewis off-line, a quick-thinking Ryan Eversley managed to squeeze the #94 Honda Civic Type-R down the inside of the chicane and through the final corner, Atlanta Speedwerks eventually snatching 2nd by just one-tenth ahead of the #27 Hyundai. An equally ambitious move from Parker Chase saw the #98 Elantra N nip past the sister #77 to steal 5th at the line!

Behind the fight for the final podium spots, Road Shagger Racing (#61) recovered from a late-race off to finish 6th ahead of Michael Johnson Racing (#54), the latter having been served a drive-through penalty earlier in the day after running over a wheel on pitroad. AOA Racing (#85) and Rockwell Autosport Development (#15) finished just ahead of Copeland Motorsports’ second entry (#51), which survived an incredibly close-call across the turn one gravel trap – somehow avoiding the wall – to round out the TCR top 10.