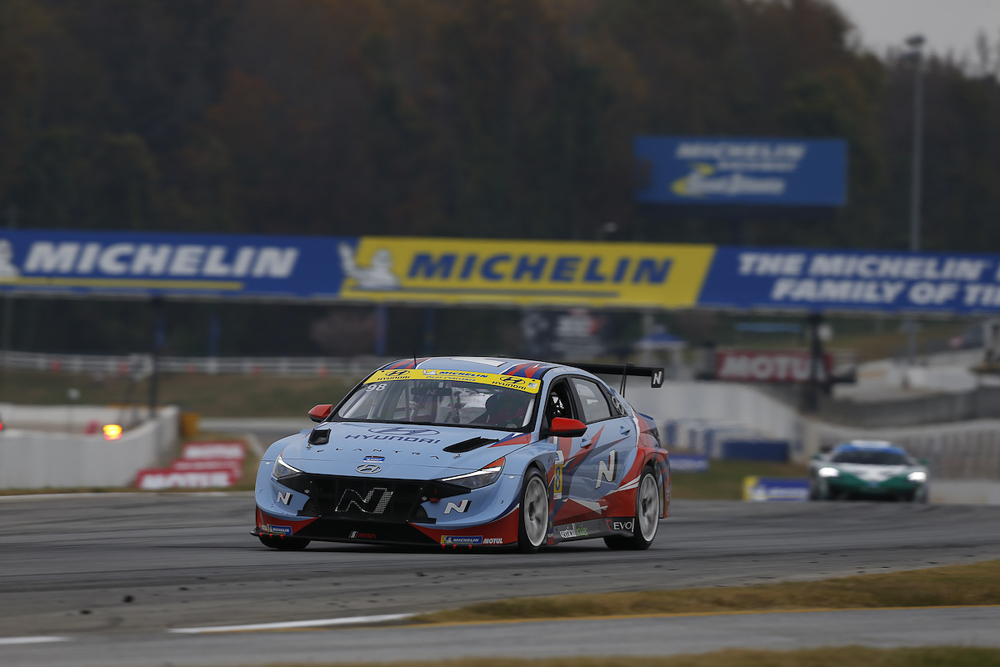 In what proved to be a crushing performance for Hyundai – which secured four of the top five spots on the TCR grid – Ryan Norman’s final flying lap of 1m 28.014s was 0.446s clear of Harry Gottsacker in the sister #33 Elantra N. The latter had at one stage looked to be on course for a second TCR pole position of the year as the final five minutes of the session began ticking down, only for an all-purple 1m 28.217s from Norman put the #98 on top. Though both American drivers managed to improve on their final runs, the front row remained unchanged until the chequered flag.

This marks the first time this season that Bryan Herta Autosport has monopolized the front row of the TCR grid in the Michelin Pilot Challenge.

Significantly, Bryan Herta’s third entry – the #77 Veloster N of Michael Lewis and Taylor Hagler – goes into the final round of the season on top in the TCR standings. Though the pair will start 12th of the 17 touring car runners, Lewis and Hagler, impressively, have only twice failed to finish on the podium, their season highlight being victory at Lime Rock.

Behind the front row, Copeland Motorsport’s Tyler Gonzalez (#27) and New German Performance’s Cliff Brown (#44) were the only other drivers to lap below 1m 29s at Road Atlanta. Following on from an storming 2nd place last time out at VIR, Michael Johnson Racing’s (#54) momentum continued with the fifth fastest time of the session with the Veloster N.

Season newcomer TWOth Autosport / Bestline AutoTech (#89) and series returnee CB Motorsports (#81), the latter of which makes its first start since round six at Lime Rock, will line-up 6th and 7th on the TCR grid. Behind them, KMW Motorsports with TMR Engineering’s Alfa Romeo Giulietta Veloce (#5) will start 8th.

Having held a provisional third row starting spot early on in the session, Sebring winner Road Shagger Racing (#61) will line up 9th ahead of the second Copeland Motorsports Hyundai (#51).

A superb opening lap from Victor Gonzalez put VGMC Racing, LLC (#88) on the second row in the very early going, though the Honda Civic quickly dropped back to 11th ahead of the championship leaders. A late-session issue saw the AOA Racing Audi RS 3 LMS (#85) stop on-track in sector two, annihilating all hope of improving on its 13th place grid slot. The returning Rockwell Autosport Development (#15) will start 14th.

Heading into the final round of what has been a fruitful but often frustrating season for Atlanta Speedwerks, team newcomer Tyler Stone set the 15th lap of the session for the #94 Honda Civic Type-R. Unusually, the Georgian team will run only one entry this weekend at Road Atlanta.

Unitronic JDC-Miller MotorSports (#17) – winner last time out at VIR – and VAN DER STEUR RACING (#19) round out the TCR grid. The Audi was the only non-Hyundai to (very briefly) hold provisional pole position after the first flying laps, but an issue on-track brought Chris Miller’s run to an early end. Mechanical gremlins meanwhile VAN DER STEUR failed to make it out on-track at all.