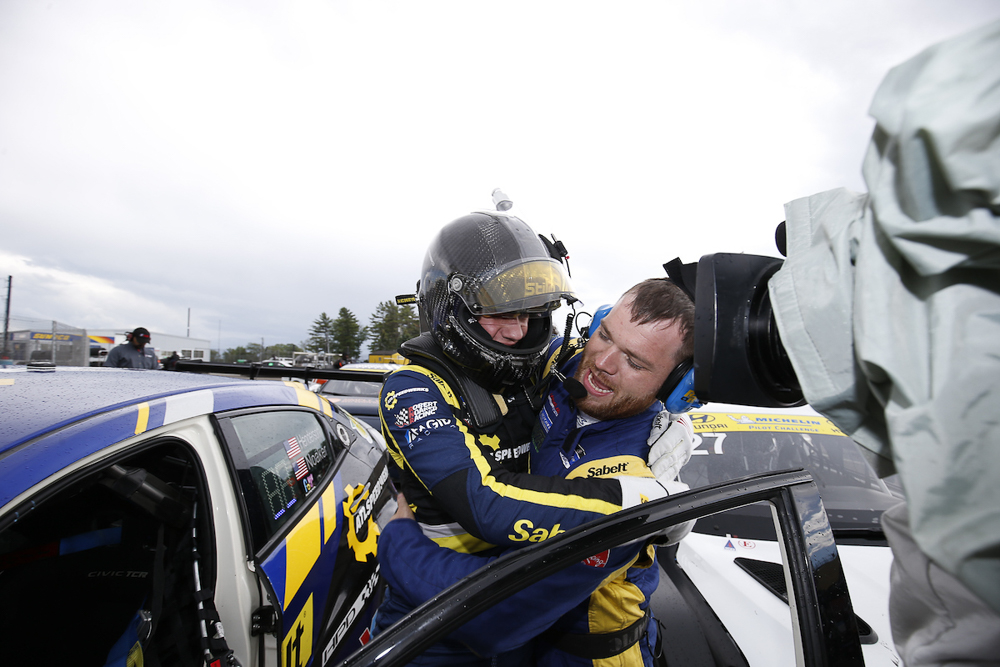 Atlanta Speedwerks has secured a 1-2 TCR finish in the IMSA Michelin Pilot Challenge at Watkins Glen in a sensational grandstand finish.

The #84 Atlanta Speedwerks, which started its fifth IMSA MPC weekend in succession from the front row of the grid, lost track position at the very start of the race, but an impressive fightback by Brian Henderson during his opening stint, plus issues for nearest rival Bryan Herta Autosport w/ Curb-Agajanian meant the #84 Honda Civic Type-R was comfortably in the lead following the first round of pit stops.

A late-race caution to extract the VGMC Racing, LLC Honda (#88) from the gravel trap however eradicated Henderson and teammate Robert Noaker’s near four-second lead with less than 15 minutes of the race left to run. The full course yellow also brought Copeland Motorsports (#27) and Road Shagger Racing (#61), both of which had been squabbling for 2nd place up to that point, right onto the Honda’s rear bumper.

When the race went green again for the final three laps, a charging Jon Morley in the Road Shagger Audi first disposed of Tyler Maxson in the Copeland Hyundai before relegating the #84 Atlanta Honda down the start-finish straight. Victory seemed imminent until the Audi found itself bottled up behind a GT4 backmarker through the Outer Loop, the loss of momentum allowing both the #84 Atlanta Honda and the sister #94 Civic to retake 1st and 2nd respectively on the penultimate lap.

The result marks Atlanta Speedwerks’ second successive victory at Watkins Glen following Todd Lamb and Ryan Eversley’s hard-fought win in the #94 entry at the same circuit last weekend. This is also the first victory of 2021 for the team’s #84 Civic, which, coming into the weekend, had finished only once in the TCR top five across the opening four events.

A fourth podium of the season also means that Ryan Eversley, who this weekend drove alongside Scott Smithson, has now extended his lead in the TCR championship standings.

Despite its issues in traffic Road Shagger Racing (#61) managed to hold-off Copeland Motorsports (#27) for the final TCR podium spot by just two-tenths of a second, a strong result from 9th on the grid.

Championship contenders Michael Lewis and Traylor Hagler rounded out the TCR top five after a strong run aboard the #77 Bryan Herta Autosport Veloster N, though the pair have now lost further ground in the championship chase. Indeed, the second event in MPC’s Watkins Glen double header proved a weekend to forget for the American team.

Replicating its impressive form in qualifying, the pole-sitting #33 BHA Elantra N had romped into an early lead at the start of the race, Harry Gottsacker pulling more than two seconds clear of the chasing pack before the first round of pit stops. At quarter-distance however, fuel pressure problems brought the #33 Hyundai in for an unscheduled pit stop, the recurrent problem costing both Gottsacker and teammate Mark Wilkins a further two pit stops, ultimately dropping the pair to a lowly 12th at the flag, one lap down.

The race for the sister #98 BHA entry didn’t go much better. An awesome start by Parker Chase meant the Hyundai was already up into 2nd behind the #33 by the first corner, and while the #84 Atlanta Speedwerks Civic eventually managed to work its way back past into 2nd four laps later, Chase thereafter managed to hold off the #17 Unitronic JDC-Miller MotorSports Audi in 3rd before the car’s first scheduled pit stop.

Unfortunately, as Chase was about to enter his pit box, the GT-division Riley Motorsports Toyota Supra was being released at the same time, leading to a near-miss between the two. Now out of position, the #98 added almost a full minute to its pit stop as BHA mechanics pushed the Hyundai back into position, ruining any hope of Chase or former series champion Gabby Chaves challenging for victory. 8th at the flag was poor reward for an impressive showing.

6th place for the #51 Hyundai Veloster N meanwhile marked a good return to form for Copeland Motorsports, which saw neither of its cars make the finish last weekend at Watkins Glen after clumsy contact between the pair at turn one, well before half-distance.

With Michael Johnson Racing (#54) and CB Motorsports (#81) sandwiching the #98 Bryan Herta entry, Hyundais finished in six of the top nine positions at Watkins Glen, mirroring (if not quite replicating) the manufacturer’s form in qualifying.

A solid if anonymous run by KMW Motorsports with TMR Engineering (#5) secured the Alfa Romeo Giulietta Veloce 10th in the TCR division, just ahead of the Rockwell Autosport Development Audi RS 3 LMS (#15).

For the second weekend in a row, VGMC Racing, LLC (#88) hit trouble almost within sight of the flag at Watkins Glen when Jon Miller made an uncharacteristic mistake, dropping the Honda Civic Type-R on the exit of turn 10. Having skittled into the gravel, the beached Honda brought out the final full course caution of the event, inadvertently setting up TCR’s down to the wire finish in the process. Once extricated, Miller did at least manage to rejoin the race en-route to 13th.

Having run at the sharp end of TCR early on, Unitronic JDC-Miller MotorSports’ (#17) race was brought to a premature end with mechanical woes after only 29 laps. The race was also disastrously short for VAN DER STEUR (#19), team namesake Rory failing to complete even a single lap when a broken front axle caused the Hyundai to spear headfirst into the barriers at turn seven during the formation lap. The first 20 minutes of the race were held under safety car conditions as the fluid from the Hyundai’s ruptured radiator was cleaned up. VAN DER STEUR would not take the start at all.