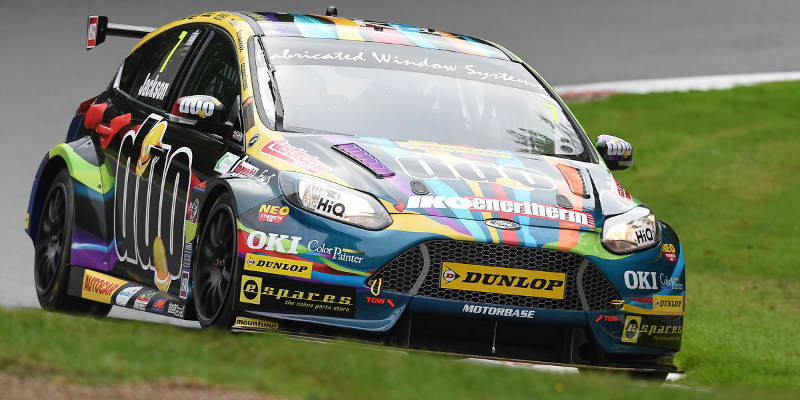 Jackson, who had been selected to start the race from pole in the reverse-grid draw, was unchallenged throughout the race, scoring his fifth win of the season which moved him up to third overall in the championship standings.

Ciceley Racing’s Aiden Moffat scored his best-ever result with second, also marking his first and only podium finish of the season.

The big news, though, was that Honda’s Shedden finished in third and in doing so took the 2016 title. The Scot thus becomes the first driver since Fabrizio Giovanardi in 2008 to successfully defend his title, with the key moment having come on lap seven when he passed his main rival Tordoff for third.

Tordoff, who was running with a lighter car in the race, simply did not have the pace, and the WSR driver as passed on lap 13 by the second Ciceley Mercedes of Adam Morgan, leaving the BMW driver to finish in fifth and miss out on the title by just two points.

Speedworks Motorsport’s Tom Ingram continued his progression through the field, taking sixth after starting from ninth, whilst MG’s Josh Cook was seventh.

Team HARD’s Jake Hill secured his sixth top ten finish of the season with eighth, ahead of WSR’s Rob Collard in ninth and Subaru’s Jason Plato in tenth.

Andrew Jordan finished in 11th for Motorbase Performance, with the fact that he finished just behind Plato on the road meaning that seventh in the drivers’ championship standings went to Plato.

Colin Turkington went into the race with a realistic chance of the title, but the Subaru driver ultimately came up short, struggling with maximum ballast on his car to finish in a lowly 12th position.

The race featured two safety car periods, the first of which came when Dan Welch spun Warren Scott into the gravel at Sheene Curve.

The second safety car period was actually at the same corner, with Welch this time ending up beached in the gravel with just two laps of the original distance left to run.

AmD Tuning’s Ollie Jackson retired from the race after eight laps when he was spun into the barriers between Hawthorn and Westfield bend.

Matt Neal had a mathematical chance of lifting the title going into the race, but the Honda driver withdrew before the start due to suffering a concussion as a result of his race two shunt.

The result means that Shedden takes the title with 308 points, ahead of Tordoff on 306 and Jackson on 292. Elsewhere, Collard was victorious in the Dunlop ‘Forever Forward’ award for making the most improvements from his grid position over the course of the season.