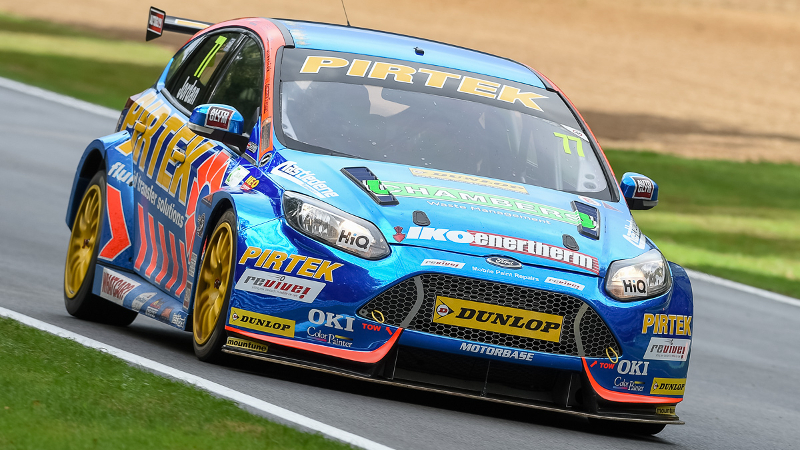 Andrew Jordan says he is ‘delighted’ to have secured a third Independents’ title in the British Touring Car Championship at Brands Hatch, despite enduring his toughest weekend of the season.

Jordan went into the final weekend of the season with a mathematical, albeit unrealistic, chance of taking the overall title.

That slim chance was shattered in the opening race, when Jordan got caught up in a second lap accident when Hunter Abbott was spun around in front of him at Druids, leaving Jordan with nowhere to go but to spear into the Chevrolet.

A recovery drive in race two from the very back of the grid yielded a meritable 13th place finish, whilst in the season finale Jordan made just enough progress to wrap up the Independents’ title with an 11th place finish.

Incredibly, Jordan took the title by just three points ahead of team-mate Mat Jackson, who ultimately won the race.

“The main aim coming to Brands Hatch was to wrap up the Independents’ title and I’m delighted that we got the job done,” said Jordan. “The BTCC field this season has arguably been more competitive than ever with lots of strength in depth, so to come away from the season with a championship title is a fantastic achievement for everyone who is involved with this programme.

“To win one title in the BTCC takes a lot of hard work, so it gives me a great deal of pride to have added a third Independents’ title to the overall crown I won in 2013. It certainly wasn’t as easy as it could have been because of the incident in race one, but I think the way in which we fought back through the field in race two shows how strong the Pirtek Racing package is.

“As ever in this game, there have been ups and downs as the season has gone, but on the whole I’m really pleased with how it has gone. The aim was to win races, fight at the front of the field, and pick up some silverware this season; which is exactly what we have done.

“I’m particularly proud to have helped Motorbase win its first BTCC titles and I think we have built the foundations for something good for the future.

“Having wrapped up the Indy title, there is no doubt that I have my eyes on the main prize again in 2017.”