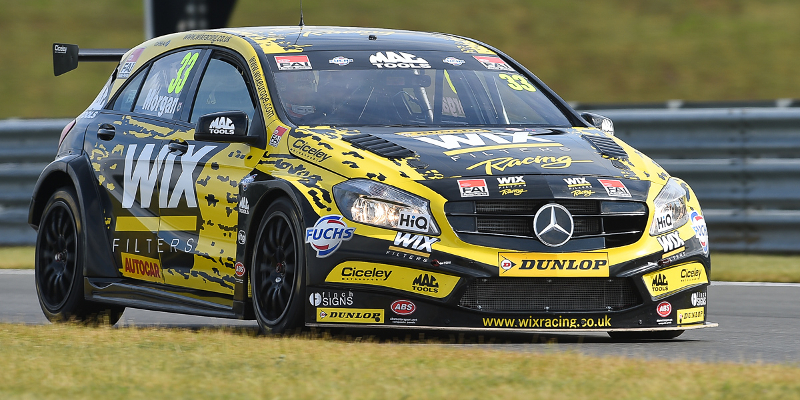 Morgan hit the top of the times in the last ten minutes, having earlier been challenging for the top time throughout the 40-minute session. The Lancashire racer’s time of 1:56.139 proved to be over four tenths faster than the best time set earlier in first practice.

The Mercedes driver ended up 0.232 seconds faster than MG’s Sutton, who had also been consistently near the top of the times throughout, with the 22-year-old having gone quickest just before the half-way stage with a time of 1:56.903 before improving to a 1:56.371.

Irishman Árón Smith was third quickest in his BKR Volkswagen CC, ahead of Speedworks Motorsport’s Tom Ingram in fourth, who went eight tenths faster than he had earlier in the day.

First practice pace-setter Colin Turkington was the leading MG driver in fifth, 0.579 seconds off the pace, ahead of the leading BMW of Sam Tordoff in sixth.

Aiden Moffat couldn’t match the pace of his Ciceley Racing team-mate and was 0.779 seconds slower in seventh, ahead of an impressive performance by Power Maxed Racing’s Hunter Abbott in eighth.

Completing the top ten were Halfords Yuasa Racing’s Gordon Shedden, who had entered the session late due to an engine change after first practice, and Motorbase Performance’s Andrew Jordan.

Further down the order 15th placed James Cole continued to out-pace his Subaru team-mate Jason Plato, who ended the session down in 21st and the slowest of the Levorg quartet, some 1.761 seconds off the pace.

Matt Simpson, who was 20th fastest, caused an earlier yellow flag zone when he lost the wheel on his Honda Civic, limiting his track time.