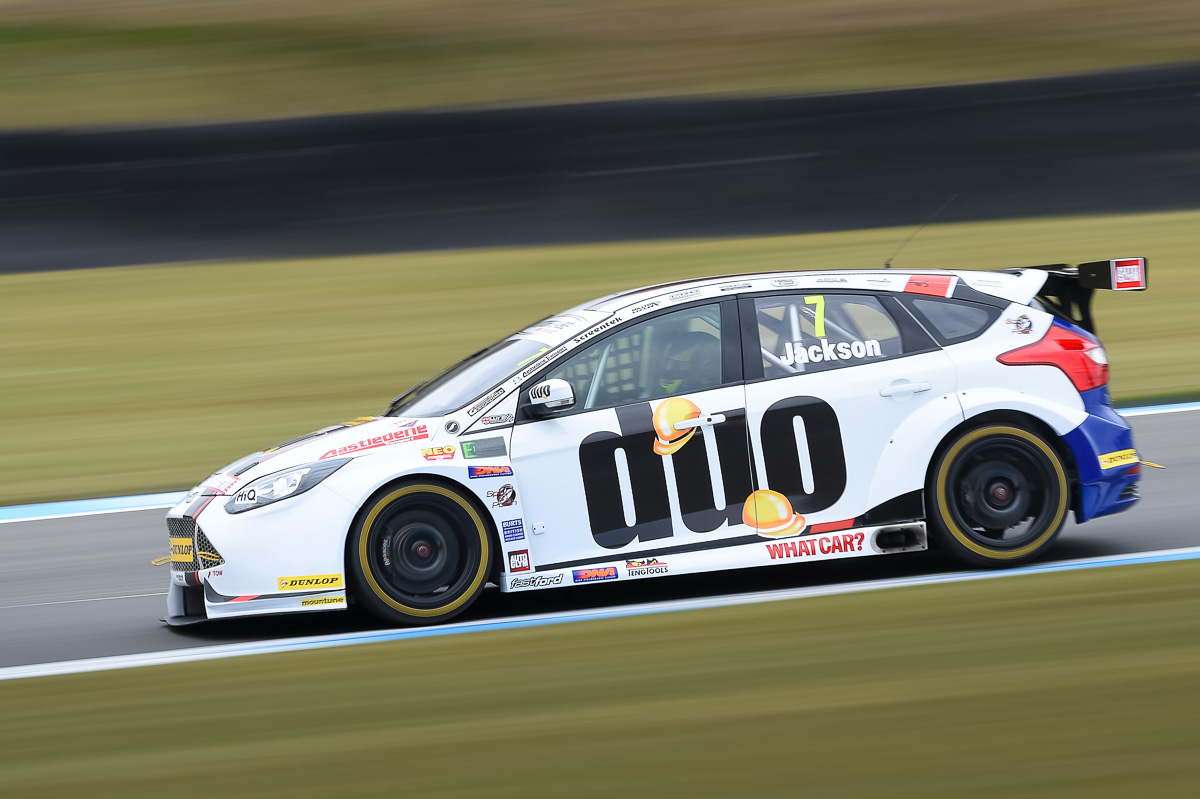 Mat Jackson made a lightning start in the Ford Focus ST, immediately deposing the MG duo of Ashley Sutton and Josh Cook before turning right into the first corner at Redgate. Sutton dropped back into the clutches of Rob Collard in the BMW 125i M-Sport whilst his team-mate maintained second behind Jackson. The safety car was deployed at the end of the opening lap as Ollie Jackson headed for the gravel trap at turn one.

The notable winners from the opening exchanges were Tom Ingram and the BMW duo of Collard and Goff who demoted reigning champion Gordon Shedden down to seventh. The Team BMR duo of Colin Turkington and Jason Plato also improved on their starting slots to run 10th and 14th behind the safety car.

There were issues for Jake Hill, who dropped down to the rear of the field after a trip across the grass after running an impressive 9th following his fifth row start on the grid. After a trip to the pitlane and a new right rear tyre, he rejoined the fray on the fourth lap.

However, it was the left-rear that proved a problem for Martin Depper as it came loose and detached through Redgate on Lap 5, forcing the Eurotech Honda wide across the gravel. Depper attempted to rejoin the circuit before realising the extent of the problem and making a beeline back across the track to safety on the opposite side.

At the front, Jackson extended his advantage by a tenth of a second lap on lap, but the real fight was for the four positions immediately behind him on the road.

MG duo Cook and Sutton were virtually nose-to-bumper and had both Brands Hatch winner Tom Ingram and the fast-starting Collard in close company.

Things began to unravel for Sutton on lap eleven, with Ingram seizing third from the rookie into Redgate, before Collard then squeezed through under braking down the Craner Curves. Jack Goff further relegated the MG driver to 6th into Coppice, though the reigning Clio Cup champion put up a spirited fight in an attempt to reclaim the lost ground, but ultimately had to slot behind.

The race continued to get worse for the soft tyre-shod Halfords Yuasa Racing works Type R machines, with both Shedden and Matt Neal losing places to Jeff Smith and Arón Smith respectively, relegating the Honda drivers who were later passed by WSR’s Sam Tordoff and BMR’s Colin Turkington.

Sutton reclaimed fifth from Collard on lap fourteen in a similar move down the Craner Curves to the one that initially bested him, though the MG took to the outside of the series stalwart as opposed to the inside line to take the place.

With three laps to run there was a big accident between Dan Welch and former Intermarque champion Matt Simpson into Coppice, neccesitating another safety car period as debris littered the area surrounding the damaged cars. The incident occurred as a result of Welch taking to the grass heading through McLean corner, with Simpson unable to avoid the Proton Gen-2 as it came back across the circuit.

James Cole then completed the plethora of dramas as his Subaru Levorg caught fire heading down the main straight, forcing him to park up at the end of the pit lane and clamber swiftly out of the car. That brought out the red flags and brought the first contest of the weekend to a conclusion, with Mat Jackson victorious ahead of Josh Cook and Tom Ingram.