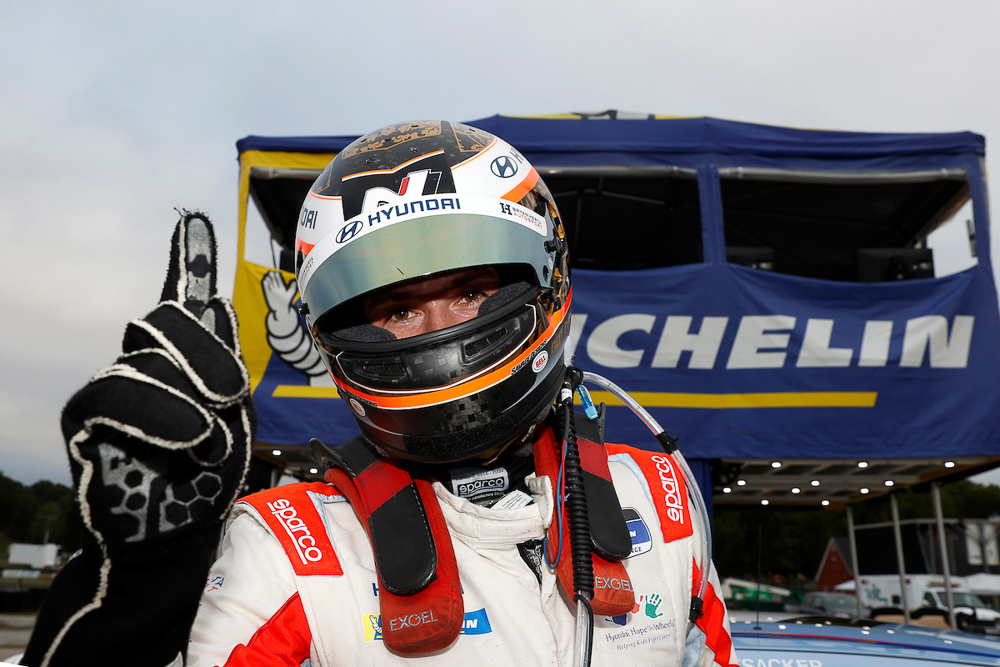 Mere moments after Harry Gottsacker had posted a 1m 57.686s around the sodden 3.27-mile VIR to secure the #33 Hyundai Elantra N TCR its first pole position since round five at Watkins Glen, the red flags were flown when the sister #98 Bryan Herta of Parker Chase (driving) and Ryan Norman disappeared in sector two. An unfortunate end to qualifying for the TCR championship contender, who are now set to start this afternoon’s two-hour race from the very back of the grid, pending repairs.

The #33 meanwhile carries the momentum from its race win at Laguna Seca into this weekend.

Pipped at the post and with its final flying lap cut short, Copeland Motorsports (#27), fell four-tenths short of pole position, but was still quick enough to secure its third TCR front row start in four races.

An impressive run from season debutant New German Performance (#44) secured the Audi RS 3 LMS 3rd on the TCR grid, just ahead of the first Atlanta Speedwerks Honda Civic Type-Rs (#84). The latter, still in championship contention, will be hoping to put its electric pace during free practice to good use during the race after the Georgian team’s worst race of the season last time out at Laguna Seca.

VGMC Racing, LLC (#88) continues its resurgent form in qualifying with 5th on the grid for the Honda Civic Type-R. Rockwell Autosport Development (#15) makes its first start since round five at Watkins Glen and will start from the third row in TCR.

A late-session hot lap from Taylor Hagler punched the third Bryan Herta Autosport Hyundai (#77), and TCR championship leaders Hagler and Michael Lewis, from the back row of the grid up to 11th, one place ahead of KMW Motorsports with TMR Engineering (#5) after an unusually quiet qualifying for the Alfa Romeo Giulietta Veloce. Another ‘casualty’ of the shortened session, the second Copeland Motorsports Veloster (#51) had yet to set a truly flying lap and will thus start on the back row.

Jason Plato: ‘It would be ace to win some races, it’s what I’m here for’