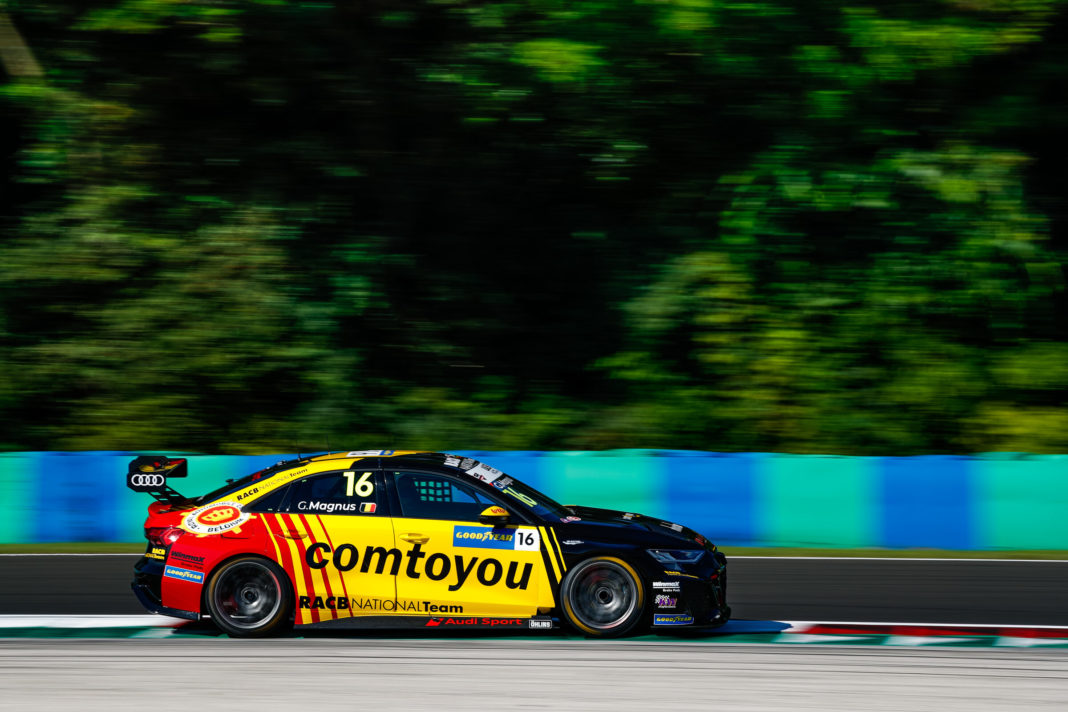 Comtoyou Racing’s Gilles Magnus put in a composed performance to lead from lights to flag and seal a maiden victory in the FIA World Touring Car Cup (WTCR) at the Hungaroring.

The Belgian made a strong start from his partially-reversed pole position in the Audi RS 3 LMS, and led team-mate Frederic Vervisch until the final tour, when the latter was forcefully passed by Mikel Azcona’s CUPRA and Yann Ehrlacher’s Lynk & Co. at Turn 8.

Magnus’ maiden win, secured by a margin of 2.127 seconds at the chequered flag, moves him into third in the points, whilst the final spot on the podium elevates Ehrlacher past Jean-Karl Vernay and into the lead at the championship summit.

Behind Magnus, it was an eventful race for Azcona, the Spaniard first making contact with Yvan Muller’s Lynk & Co. on the outside line heading down to the first corner.

Whilst the Frenchman was turned around, and eventually finished 15th, Azcona survived and continued, then in fourth behind Ehrlacher and Vervisch.

He managed to get the switch on Ehrlacher for third prior to a mid-race safety car intervention after Rob Huff’s Zengo Motorsport CUPRA stopped just after the chicane with front-left suspension damage.

Whether the Brit’s damage can be repaired in time for him to take up pole position, secured by 0.3 seconds yesterday, later this afternoon remains to be seen.

As Vervisch allowed Magnus to break clear on the restart, he then found his mirrors full of a fired-up Azcona for the remaining laps, with Ehrlacher waiting in the wings to capitalise on any chaos ahead.

He held firm until Turn 8 on the final tour of the 2.7-mile circuit, when a robust move to the inside promoted Azcona to the runner-up spot, with Ehrlacher seizing his opportunity in the aftermath to slip through into third.

They took the flag in that order, but whether the result remains the same will prove a point of contention.

Thed Bjork had a steady drive to fifth in his Cyan Racing-run Lynk & Co. behind Vervisch, keeping home hero Norbert Michelisz’s Hyundai Elantra N TCR at bay by three tenths of a second.

Attila Tassi was 13th in the first of his two home races this weekend, with erstwhile points leader Vernay 14th ahead of Muller.

The final race of the weekend in Budapest is scheduled to get underway at 14:15 (BST) this afternoon.