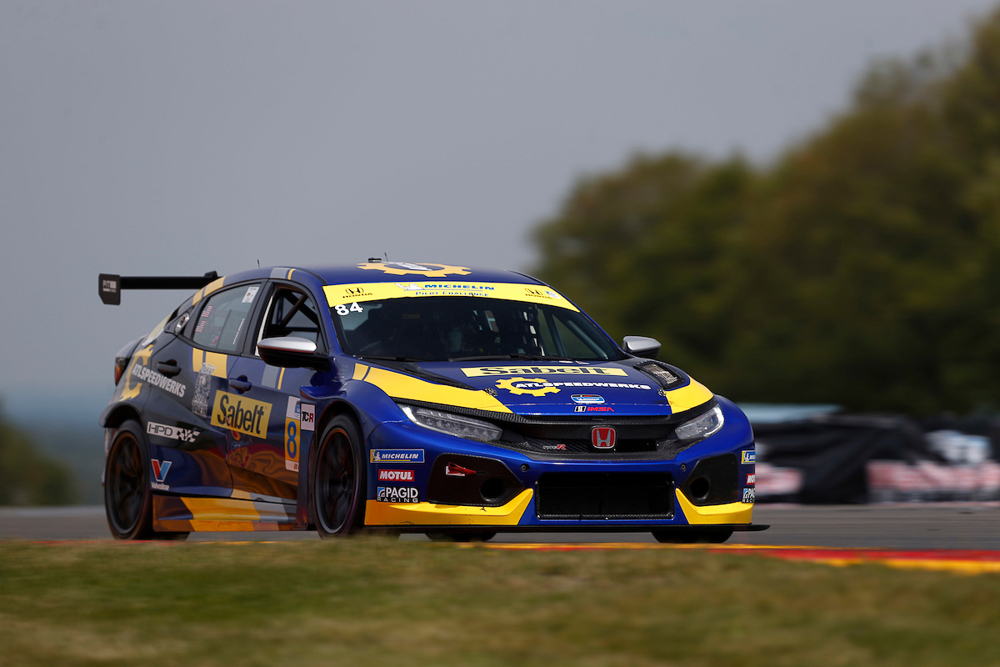 Altanta Speedwerks continued its remarkable run of form in qualifying for the 2021 Michelin Pilot Challenge season by securing its fourth consecutive pole position with the #84 Honda Civic Type-R, almost a full second clear of the rest of the TCR field.

Robert Noaker was on a charge shortly after the division’s 15-minute qualifying session got underway, setting the pace with a 1m 57.273s on his first flying lap. Noaker then put the TCR top spot out of reach completely just two laps later with a 1m 56.046s, the Virginia native becoming one of only three drivers to duck below the 1m 57s mark at Watkins Glen. Notably for the Japanese marque, all three were piloting Honda Civic Type Rs.

Qualifying has, however, been the weekend highlight in 2021 thus far for the #84 Atlanta Speedwerks Honda (Robert Noaker / Brian Henderson), the Civic having failed to finish higher than 11th in any of the opening three rounds owing to on-track incidents, mechanical woes, or, bizarrely, a non-regulatory front splitter.

In a last grasp effort, Todd Lamb secured an all-Atlanta Speedwerks front row for tomorrow’s TCR race aboard the #94 Honda, his 1m 56.871s being posted with just 30 seconds left on the clock. Despite falling more than eight-tenths short of Noaker’s sterling effort, the result is comfortably Lamb and teammate Ryan Eversley’s best qualifying result of the 2021 season thus far, leapfrogging the car’s previous best – 7th last time out at Mid-Ohio – comfortably.

Lamb’s lap was particularly frustrating for Karl Wittmer, who moments earlier had just vaulted the #88 VGMC Racing, LLC Honda up the field with the 2nd fastest lap of the day. The #88 Civic (Wittmer / Victor Gonzalez) will thus start 3rd alongside the #81 CB Motorsports Hyundai Veloster N TCR.

Having twice been relegated from the front row by faster laps from his rivals, Tim Lewis, aptly, qualified the #5 KMW Motorsports with TMR Engineering Alfa Romeo Giulietta Veloce TCR 5th ahead of the #19 VAN DER STEUR RACING Hyundai Veloster and the highest placed of the Bryan Herta Autosport w/ Curb-Agajanian Hyundais, the #33 Elantra. The #27 Copeland Motorsports Hyundai Veloster will start 8th.

Sebring TCR winner Road Shagger Racing (#61) rounds out the TCR top 10 on its return to this year’s Michelin Pilot Challenge, the Audi RS 3 LMS having missed the previous round at Mid-Ohio. Michael Johnson Racing (#54), the second Copeland Motorsports Hyundai (#51) will line-up 11th and 12th.

Qualifying proved a particularly trying session though for two of this year’s three TCR winners. Mechanical problems hindered William Tally’s run aboard the Daytona winner Unitronic JDC-Miller MotorSports Audi RS3 LMS (#17). The final Bryan Herta entry meanwhile (#98), which most recently took TCR victory at Mid-Ohio last time out, failed to set a qualifying lap at all around Watkins Glen, and will thus start at the tail of the 14-car TCR field tomorrow.