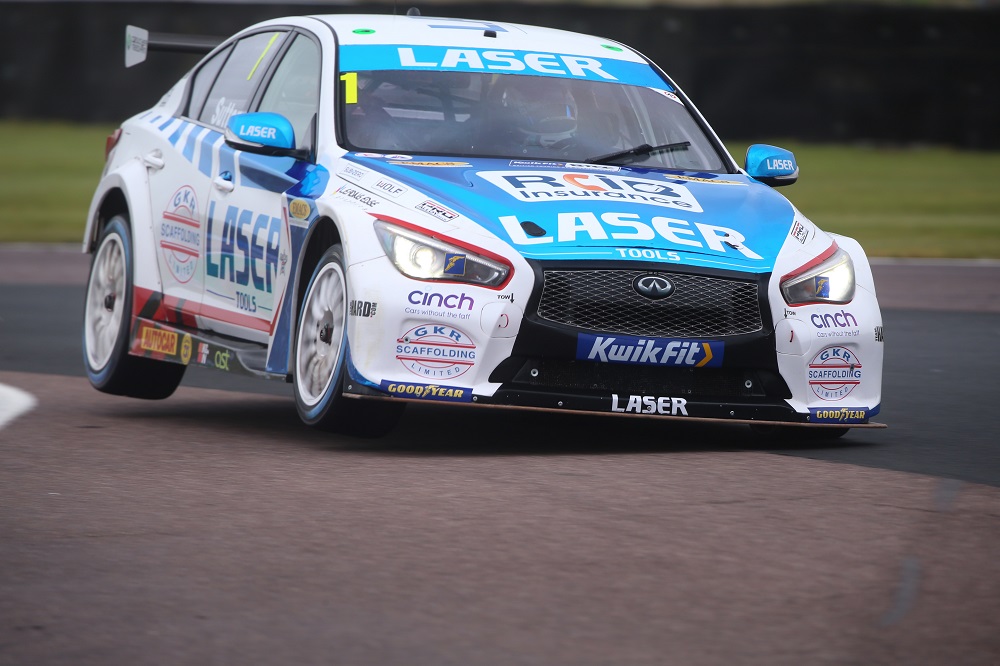 Ash Sutton made the most of changing conditions to take the win in round three of the Kwik Fit British Touring Car Championship ahead of Jason Plato.

Ever changing weather conditions throughout the 16-lap race saw defending champion Sutton, driving the Laser Tools Racing Infiniti Q50, get the win after overtaking Jake Hill – who was one of only a few drivers to choose slicks – on lap ten.

The MB Motorsport accelerated by Blue Square driver had been set for second place after appearing to cope despite rain returning late on in the race, but Plato in the Power Maxed Racing Vauxhall managed to overtake him in a drag race to the line on the final lap.

After beginning the race on slicks despite a damp track, both Hill – who started ninth – and Tom Oliphant – who started second – managed to pull back through the field after originally being on the wrong tyre choice for the damp conditions.

By the end of lap three, Team BMW driver Oliphant found himself down in 19th place, but the track would gradually dry through the middle stages which saw him move back up through the field.

However, after then recovering back up to second, further drama unfolded for Oliphant after it was revealed he had been given a time penalty after being deemed to be in the correct position in his grid box.

That, mixed with the wet conditions making a return late on, saw the Team BMW driver end the race in seventh.

The result means Hill now leads the Drivers Standings going to Snetterton next month by a single point over double race winner this weekend Josh Cook.

Fourth in race three was the fast-charging Gordon Shedden, who made the most of the tricky conditions after starting towards the back of the field in 18th.

Dan Lloyd – another series returnee – made it two Power Maxed Vauxhall’s in the top five, whilst Colin Turkington finished sixth in race three.

Both double race winner from earlier Cook and Excelr8 Hyundai driver Tom Ingram were given penalties early in the race due to not having their wheels fitted to their cars in time on the grid, meaning both ended the race down the field and out of the points.

More action unfolded late on the penultimate lap as Rory Butcher – whose Toyota GAZOO Racing UK team managed to rebuild his car following his large race two shunt – collided with the Laser Tools Infiniti of Carl Boardley, which had spun after contact from Rick Parfitt. Both cars were badly damaged as a result.