René Rast held off late-race pressure from Nico Müller to claim victory in Sunday’s second DTM race of the season at Spa-Francorchamps, as the two title rivals from last year continued their battle where they left off.

Rast had earlier qualified his Audi RS5 on pole position, edging out Robin Frijns, but it was Müller who emerged in second behind the German at the first turn on the opening lap.

Thereafter Rast was unable to open up enough of a gap in the opening laps to keep his rival at bay, and on lap four Müller used his Drag Reduction System (DRS) to power past Rast on the Kemmel straight.

Rast then pitted on lap 13, one lap before Müller, with the duo emerging just a second apart.

In the closing laps Rast closed down the gap to Müller and on lap 21 returned the favour on his Swiss rival, passing for the lead on the Kemmel straight into Turn 5.

With just five laps of racing after, Rast held Müller at bay to take his first win of the season and keep the Swiss driver’s championship lead at just seven points.

Having lost out to Müller at the start, Dutchman Frijns spent much of the race circulating in third, leaving the Audi driver to complete the podium and make up for missing out on a top three on Saturday after taking the season’s first pole.

Jamie Green was fourth, the Brit unable to replicate his drive through the field to a podium on Saturday, six seconds adrift of Frijns.

For the second consecutive race it was an Audi 1-2-3-4-5 as Team Phoenix’s Mike Rockenfeller took fifth, the German having lost out to Green six laps from the end.

South African Sheldon van der Linde was once again the best BMW driver in sixth, ahead of the only other factory Audi of Loïc Duval in seventh.

Aberdein had to stage a recovery drive through the field, after being turned around at the chicane on the opening lap by Harrison Newey, who was handed a drive-through penalty for the incident.

Wittmann ran as high as third before his pitstop, and the two-time champion was the last driver to make his mandatory pit stop, the late-stopping strategy failing to pay off in Belgium.

BMW’s Philipp Eng just missed out on the points in 11th, ahead of the top rookie of WRT’s Fabio Scherer in 12th.

Newey was the race’s only retirement, pulling into the pits to stop after 14 laps with a technical issue on his Audi.

BMW ‘must improve’ on tyre management after difficult season opener 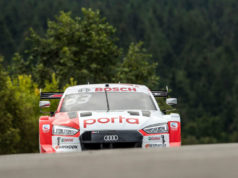