TOCA has confirmed that the British Touring Car Championship season will be postponed until at least the end of June, after Motorsport UK extended its suspension of all UK racing activities.

The announcement was made after UK Prime Minister Boris Johnson addressed the nation on Monday evening outlining further restrictions of movement and gatherings in light of the ongoing COVID-19 pandemic.

The first three BTCC events at Donington Park, Brands Hatch and Silverstone had already been postponed, and now the following events at Thruxton in May and Oulton Park in June are also on hold.

It means that the earliest the BTCC season would currently get underway is at Snetterton on 25-26 July.

“Following the address to the nation by the Prime Minister on the evening of 23rd March, Motorsport UK has today extended its suspension until at least 30th June.

“This is a decision which is entirely sensible and correct in light of the current circumstances and removes any uncertainty for the immediate future.

“We appreciate these developments now confirms the postponement of at least the first five BTCC events this season, but we will be working tirelessly with all stakeholders to reschedule new dates when possible.

“More details will follow on btcc.net over the coming days and weeks, but in the meantime a full statement from Motorsport UK can be read below…

“In light of recent developments in the COVID-19 crisis, and following the address to the nation by the Prime Minister on the evening of 23rd March, Motorsport UK has today extended its suspension of all organising permits and Certificates of Exemption for motorsport events until at least 30th June.

“This move provides clear guidance to event organisers, venues, competitors, officials and volunteer marshals of the role that Motorsport UK must play in supporting the broader UK public health agenda.In recent days the feedback from our members and the community was a need for increased clarity to allow them to plan appropriately and, should the need arise, put in place necessary contingency measures.

“Motorsport UK Chairman, David Richards explained, “Motorsport UK has a vital role to play with its community in re-inforcing that, at this time of national emergency, we must all stay at home to play our part in protecting the NHS and ultimately saving lives.  Today, the government have required that we effectively lock-down for a period of three weeks, however given that the most vulnerable in our society are required to isolate for three months, it is evident that the most responsible course of action was to propose a longer suspension of our sport.  When we reflect back on this time, it will be a brief, but vital, hiatus from our everyday motorsport life and we must put this in perspective.  This is a time of national unity and we need to come together with the broader public community to do all we can to support this battle and ultimately save lives.”

“Motorsport UK will continue to monitor the prevailing advice from the UK Government in respect of the COVID-19 international pandemic and will update the motorsport community accordingly.” 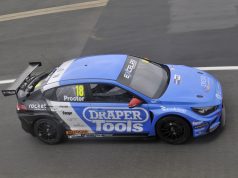