Hyundai Team Engstler has confirmed that Nicolas Gruber and Antti Buri will form its driver line-up in this year’s ADAC TCR Germany series, with both racing Hyundai i30 N TCR cars.

Buri is entering into his fifth consecutive season in TCR Germany, although it will be the first time the Finnish driver has competed in a team that isn’t his own.

Buri, 31, led more of last year’s TCR Germany series than any other driver, but at the end of the year he was pipped by Max Hesse to the title, whilst Harald Proczyk also beat him to the runner-up spot, leaving Buri in third.

In a bid to claim the title in 2020, Buri has switched to the title-winning team, where he hopes to add to the eight wins he has achieved in TCR Germany over the past four years.

“I am very happy to be able to compete with the Hyundai i30 N,” said Buri. “The Engstler team is a top outfit in motorsport, and the Hyundai is very strong, so it will certainly be a very interesting season.

“My goal is clearly to win the title. The series is very competitive, but I’ll give it my all.”

Buri will be joined by 18-year-old rookie Nicolas Gruber, who recently took part with the team in the TCR Malaysia series’ first two events.

The Austrian was victorious on his début weekend at Sepang, and heads into TCR Germany with the aim of clinching the rookie class honours.

“The Hyundai is very stable and allows much higher cornering speeds than I expected from a touring car,” said Gruber.

“My aim is to learn as much as possible with the experienced Team Engstler, reach the top five regularly, and win the rookie title.”

Team Engstler will run three cars, with the driver of its other car set to be rotated between guest and VIP drivers, as in 2019. Previous competitors of the guest car include Thierry Neuville, Gabriele Tarquini and Jessica Bäckman.

“With Antti and Nico we are very well placed,” said Team Manager Andreas Klinge. “We are welcoming one of the fastest TCR drivers of the past years and a young, up-and-coming talent.

“With them, we have a good chance of defending the two titles we won last year. With Nico, we also want to fight for the Junior Challenge title for young drivers.” 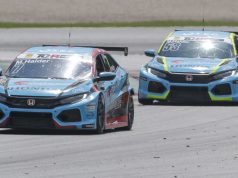