The grid for the first TCR Asia Pacific cup has been confirmed, with 22 cars set to line up for the Formula 1-supporting race on the Melbourne Street Circuit this weekend.

The field will see seven different car brands on track, with a combination of both local and international talent duelling to take the cup over the three-race weekend.

Tander will line up in a brand-new Audi RS3 LMS run by the Melbourne Performance Centre. Tander won one race in TCR Australia in 2019 and stood on the podium five times in Audi machinery.

Ribarits returns to MPC in an Audi, having raced to a podium with the team last year at Phillip Island, before he made another one-off appearance in a Holden Astra with Kelly Racing at Winton later in the year.

Hong Kong racer Paul Ip was originally to race with Wall Racing, but work commitments mean that he has been kept out of the country and will now be replaced by 35-year-old Japanese racer Shirasaka.

Despite his absence from this event, Ip is still set to compete in the TCR Australia season opener at Sydney Motorsport Park later in the month, ahead of a full season in the series.

Front-runners from last year’s TCR Australia series include reigning champion Will Brown in a Hyundai, Dylan O’Keeffe in a Renault, Aaron Cameron in a Peugeot, James Moffat in a Renault and Nathan Morcom in a Hyundai.

Supercars racer Michael Caruso will line up in an Alfa Romeo, whilst former Supercars ace Jason Bargwanna takes to the grid in a Peugeot 308.

Two practice sessions and qualifying will be held on Thursday, followed by one race each day on Friday, Saturday and Sunday. 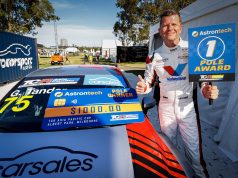