Senna Proctor will join Excelr8 Motorsport for the 2020 British Touring Car Championship season, racing one of the outfit’s all-new Hyundai i30 Fastback N Performance cars in the series.

Proctor joined the BTCC in 2017 at the age of just 19, driving for Power Maxed Racing in his inaugural season.

The youngster immediately impressed, claiming 14 points finishes over the season, and he remained with the team in 2018 when he claimed a sensational maiden win at Brands Hatch – becoming the third youngest winner in the series’ history.

For 2019 Proctor moved to Team BMR to campaign one of its Subaru Levorgs, but with the team scaling back its efforts for 2020 and a year in which Proctor was in the points ten times, he will move team again for 2020.

Exceler8 announced last year that it would bring the South Korean car manufacturer Hyundai’s name to the grid for the first time, and the Suffolk-based team has been busy during the winter preparing two new i30 cars.

Exceler8 Motorsport joined the BTCC grid at the start of the 2019 season with a brace of MG6 cars for Sam Osborne and Rob Smith as it sought to learn the series and its regulations.

“I am incredibly excited to be joining Excelr8 Motorsport,” said 21-year-old Proctor. “I can’t wait to get behind the wheel of the new Hyundai BTCC car.

“When Excelr8 contacted me back in September about the possibility of leading a new car development for them I have to say I was honoured.

“Having met the team at Excelr8 it was clear that they share the same ambitions as me of one day lifting the BTCC crown and with my past experience of FWD we can grow together and make this become a reality over the next few seasons.

“But it’s one step at a time and we are under no illusion that there will be a lot of hard work ahead for 2020, it will be as many top ten finishes and possibly podiums to get the ball rolling.

“I am heading into my fourth season in the BTCC and along with the expertise of Excelr8 Motorsport I think we could be a force to be reckoned with in 2020 and beyond.”

Team Owner Justina Williams is hoping that Proctor can help the team to move further up the grid in its second season of competing in the BTCC.

“Wow, we are delighted to have attracted Senna to our team,” said Williams. “He is proven in BTCC and will now help lead our new Hyundai i30 development.

“This will ensure that we continue on our journey towards the sharp end of the BTCC grid and in the longer term to be challenging for BTCC titles together.”

Team Principal Oliver Shepherd says that Proctor’s signing shows a sign of intent from the team which was founded in 2009.

“2019 was a learning year for Excelr8 in BTCC, whereas 2020 is the year where as a team we will show that we are not just in BTCC to make up the numbers.

“Senna joining the team is a massive step towards this aim and we are certain that his raw speed and his experience in BTCC will be key ingredients in helping us to make this step forward.

“We are looking forward to working together with Senna to take the fight to the established teams. Bring it on!” 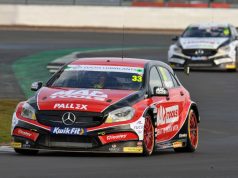