Liam McAdam will contest the 2020 TCR Australia series in an Audi RS3 LMS for his own self-run team, with the 22-year-old also enlisting the support of global TCR superstar Jean-Karl Vernay.

McAdam contested the final three rounds of the inaugural 2019 season in an Audi run by Melbourne Performance Centre, claiming a best finish of sixth at Sandown Raceway.

The Brisbane-based driver has enlisted the support of 2017 TCR International series champion Vernay to help him prepare for the 2020 season, with Vernay joining McAdam at Phillip Island today (Wednesday) for pre-season testing.

McAdam will also partner up with experienced engineer John Russell, a former Formula 1 and Supercars engineer, for the forthcoming season, which he will contest in the RS3 which Melbourne Performance Centre ran for several drivers in 2019.

Further testing is scheduled to take place at Winton Raceway on February 26.

“Having JK here is very advantageous for our testing program,” said McAdam. “He has been really good getting set-up advice, and he has had some of his engineers from WTCR giving us some further assistance.

“Straight out of the box here at Phillip Island, the car has felt really good.

“We’ve also been working on my driving, because he is far more experienced than myself and is able to give the feedback that I need to get the most out of these cars.

“The whole point of running the last three rounds last year was to get a taste for the cars and understand them.

“Running with MPC we learnt a lot, and it has put us in a good position to run our own privateer effort.

“It’s great to have John Russell with us too. I first worked with him in 2015 in Super2, and the opportunity came to snatch him up so we are very excited and we are going to work well together.”

Vernay admitted that he hoped to be able to return to Australia for some more events in 2020, including the planned endurance event at the famous Mount Panorama circuit in November.

“He has bought the car that I raced at Queensland, and he wanted some tips and using my experience to ensure that he is a title contender this year,” said the Frenchman.

“Liam showed good potential last year and the test has been going well. I’m just here to show him some tips to make the difference driving wise, as well as some technical support. He is doing everything right, so we’ll see how he goes at the first race.

“Phillip Island is an impressive circuit. When you see a track like this with such a landscape, it is unbelievable. I’ve never seen anything like this before. It’s a magic place.

“I’ve done a few laps around here. I’m really impressed with the track and I’m sure we’re going to have some fun.

“I would really like to come back to Australia for some racing at the TCR Bathurst 500 or even the Albert Park races. We’ll just have to see what the future holds.” 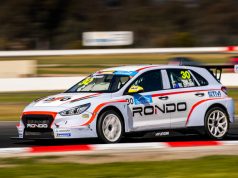