Dan Lloyd emerged as the championship leader after the first two races of the TCR Malaysia series, despite Hyundai Team Engstler drivers Luca Engstler and Nicolas Gruber sharing the victories in Sepang.

Luca Engstler had dominated the earlier qualifying session, the young German going half a second faster than his nearest rival, Brit Dan Lloyd in second.

At the start of the race Lloyd kept close to the reigning champion, but as the race went on the Honda driver fell back from his Hyundai rival, with Engstler eventually going on to win by just over four seconds, the most winning driver of 2019 also getting his 2020 season off to a strong start.

Behind Lloyd, the podium was completed by Malaysia’s Gilbert Ang, who was at the wheel of a Viper Niza Racing CUPRA. Ang had taken the position when he passed Australian Declan Fraser for the position, with the latter also being passed by Nicolas Gruber and Freddie Ang.

In the end Fraser returned to the pits with damage to his car from contact with Ang.

Freddie Ang finished just behind his brother in fourth in his CUPRA, ahead of China’s Yang Xi, who is the sole entrant from Teamwork Huff Motorsport in an Audi.

Asian TCR regular Douglas Khoo was sixth, ahead of Fraser in seventh, who was classified a lap down after stopping in the pits for a change of tyres.

Gruber was the only non-finisher, after contact with Gilbert Ang when trying to pass the Malaysian local.

The reverse grid placed Yang Xi on pole position, with Nicolas Gruber alongside, the Austrian having lost his fastest two laps in qualifying for track limits infringements, placing him at the front for race two.

Gruber immediately pounced on Yang for the lead and never looked back, building up a sufficient margin to protect him from the challenge from Lloyd, who quickly worked his way into second.

Lloyd came under significant pressure from Engstler for second, but the German was unable to find a way past and in the latter stages of the race dropped back due to tyre issues.

Gilbert Ang once again completed the podium in third in his first weekend of touring car racing, ahead of Fraser in fourth, who enjoyed a solid race in his Engstler-run Hyundai.

Freddie Ang was fifth, ahead of Xi and Engstler in seventh. The latter thus leaves the opening weekend of TCR Malaysia four points behind series leader Lloyd, who has 40 points after taking second in all of the scoring sessions. Ang is third with 33 points. 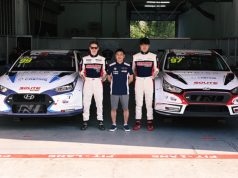