Goodyear has been confirmed as the new official tyre supplier to the FIA World Touring Car Cup from 2020 onwards, replacing Yokohama as the sole supplier of rubber to the series.

Yokohama has been working with Eurosport since 2006, when it took over the contract to supply tyres to the WTCC from Michelin.

However, the Japanese brand will step aside to make way for Goodyear in 2020, which will provide its Eagle F1 SuperSport race tyres to the series.

Goodyear returned to racing earlier this year with a deal to supply the FIA World Endurance Championship, and it has reaffirmed its commitment to global motorsport by adding the WTCR deal, which lasts for three years.

“We are excited to be joining Eurosport and the FIA by becoming the official tyre supplier for the FIA WTCR,” said Mike Rytokoski, Vice-President and Chief Marketing Officer, Goodyear Consumer Europe

“This complements our recent comeback into global motorsport through the FIA World Endurance Championship.

“It allows Goodyear to connect with fans in a wide range of countries, and also prove the performance of our Goodyear Eagle F1 SuperSport range of racing tyres.”

“At the same time, we thank Yokohama for its unwavering support of WTCR – and the FIA World Touring Car Championship before that – and the expertise and professionalism it brought to the series over the last 14 years. We wish the company and staff well for their next challenge.

“Goodyear has a long and successful history in motorsport and we are very proud it has chosen the WTCR as an international racing flagship.

“Discovery and Goodyear will be very active together all year long to reconnect that iconic brand into the racing community with quality content and a full range of very creative activations.

“We have no doubt that Goodyear will be a first-class partner on the technical and marketing fronts of WTCR.”

Goodyear previously had race-winning heritage in the popular European Touring Car Championship throughout the 1970s and 1980s. 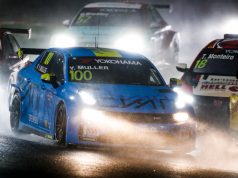