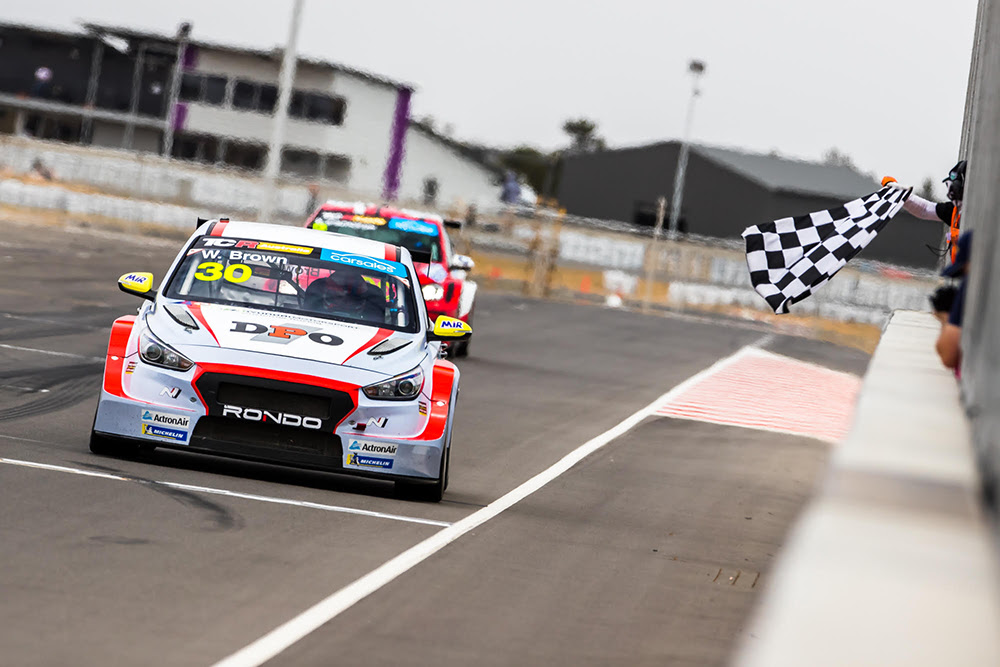 Recently crowned TCR Australia champion Will Brown registered  a seventh victory of the campaign in dominant fashion in the opening race of the season finale at The Bend Motorsport Park.

His charge was aided in part by steering repairs for polesitter Dylan O’Keefe’s Alfa Romeo Giulietta that left the Australian in the pit lane when the lights went out.

The damage from the clash has ruled both drivers out for the remaining two races this weekend and brought their season to a premature end.

McAdam has also been docked 40 points by the officials for his part in the incident after having been deemed to have driven recklessly.

Brown controlled the restart well on lap five and extended his advantage over D’Alberto, who in turn faced pressure from Aaron Cameron’s Volkswagen Golf GTI TCR.

That battle gave Brown the breathing space required to cement his seventh victory of the season by 1.1 seconds, with Cameron capitalising on a mistake from D’Alberto to assume second on the road.

Cameron had been consistently reeling in Brown, but ultimately ran out of laps to mount a significant challenge for the win.

“I was able to get a good start and lead into the first corner and maintain it from there,” explained race-winner Brown.

“While we’ve already wrapped up the championship, we wanted to come to The Bend, have fun and win races so we’re really happy to kick the weekend off with a win.

“The tyre bank is not a problem, it’s just that the front tyres, if we have enough to put on a new set on the front each race, but, it’s definitely something we’ll look at overnight because if we got another safety car period in that race I would have come under pressure from Aaron Cameron.”

O’Keefe’s struggles means both D’Alberto and Cameron leap-frog him in the standings into second and third respectively with two races left to run.

D’Alberto might not have finished on the podium at all, if not for a mistake by the chasing Chris Pither’s Renault Megane TCR on the penultimate lap; the latter then had to turn his attentions to defending from Jordan Cox’s Alfa and John Martin’s Honda.

There was time for one more late drama – this time in the battle for tenth – as an unsuccessful lunge on Iain McDougall’s Audi from the Subaru WRX of Barton Mawer damaged his rear suspension.

So Brown led Cameron, D’Alberto, Pither, Cox and Martin as the top six at the chequered flag, with Jason Bright’s VW seventh.

Russell Ingall’s Audi, the Renault of James Moffat and McDougall round out the top ten.

The second race of the weekend is scheduled to get underway at 01:10 (UK time) on Sunday morning.