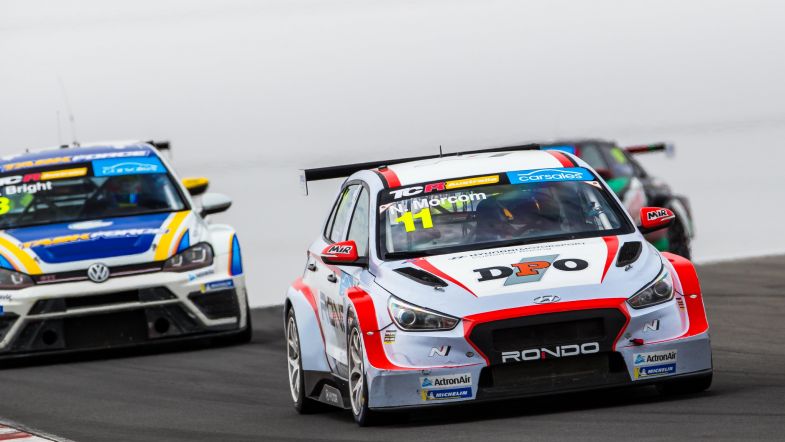 Nathan Morcom made it nine different winners for the inaugural season of TCR Australia after claiming a maiden victory in a drama-filled season finale at The Bend Motorsport Park.

Aaron Cameron and 2019 champion Will Brown made a level start on the front row, but both were bested by a fast-starting James Cox and James Moffat on the run to the first corner.

Brown was forced to slot his HMO-run Hyundai i30 N into third on the road, whilst Cameron fell back to fifth in the opening exchanges behind Brown’s teammate Morcom.

That remained the status quo at the front for another two laps, before Morcom’s dive to the inside of Brown at the Hairpin released him to chase down Moffat’s Renault Megane for the runner-up spot.

He appeared to have the job done as the pair ran side-by-side through the first corner, but Moffat made good use of Turns 2 & 3 to retain the advantage.

Things were progressing less-than-ideally for Brown, meanwhile, as Chris Pither’s Renault relegated him another spot to fifth.

A problem for Moffat curtailed his race, forcing the Renault to park on the GT circuit between Turns 8 & 9; with Morcom released and hunting down Cox with Pither in tow, the cards were stacking up nicely for a three-way showdown, each driver in search of a maiden win.

Cox would be denied his chance, however, with a puncture cruelly ending the Alfa’s race with six laps to go.

Morcom inherited a race lead he would not relinquish, keeping Pither at arm’s length to win by 0.7 seconds at the chequered flag.

It marks the ninth different race winner in a highly-competitive first season of TCR racing in Australia, with Brown completing the podium.

The other key talking point of the race revolved around the battle for the vice-champion honours between Race 2 winner Cameron and Tony D’Alberto, with the winner also set to leave The Bend with a £50,000 payday.

It seemed all but certain the honours would go to Cameron, with D’Alberto dropping to 15th on the opening lap.

However, the 33-year old battled back through the field in sublime style, moving into sixth behind Cameron, but with a mountain to climb – several seconds split the pair with a handful of laps left on the board.

Lady luck would intervene, with a mechanical problem for Cameron slowing the VW. D’Alberto caught and passed his fellow Aussie on the main straight heading onto the penultimate lap, and would go on to take the honours as Cameron dropped to tenth at the flag.

So, the finishing order was Morcom, Pither, Brown, an impressive showing from Andre Heimgartner in fourth and D’Alberto rounding out the top five.

Aurelien Comte ended a frustrating weekend for the Peugeot 308 and DG Sport on a high after charging through to eighth; both he and Tim Brooks’ CUPRA passed the hampered Cameron at the line – he rounds out the top ten.

So, it’s Morcom’s moment in the sun, as TCR Australia ends it’s maiden season of competition with an action-packed thriller. Onwards to 2020…