Rast had an eventful race, after beating pole-sitting teammate Jamie Green into turn one was hassled by the British driver for the entirety of the opening stint.

“I had a very good start and was leading,” explained Rast, “And the car was actually quite well balanced.

“Then at one point I felt like Jamie just got quicker and quicker and I felt I was losing pace.”

Rast then lost the lead to Green in the stops after a slow rear right change cost him over a second. The 32-year-old then was passed by a late-stopping Robin Frijns, the Audi Sport Team Abt Sportsline closing a mnear 6 second gap in only a handful of laps.

“We stopped pretty early. I think we had a small issue on the rear right, and we lost a bit of time there,” elaborated Rast.

“They were both much quicker than me, so obviously not happy with our race pace today, but overall this year we have been very strong at every race.”

Rast compared his second title to his first DTM triumph in 2017 which saw him overturn a 21 point deficit in the final weekend at Hockenheim to beat Mattias Ekström to the crown.

“Its a bit different. Starting the final weekend in 2017 i was in the back foot,” explained Rast, “So it was unlikely to win the championship, but until the last lap on the final race weekend I didn’t know I was champion.

“This time we were not one hundred percent sure. You could prepare yourself for becoming DTM champion again and you’re a bit more settled in yourself.

“I cant really believe it so far. Like 2017 I think it will come a bit later.

“We’ve all worked for that title, so many weeks, hours, nights”

“Even at mid-season you dont know if you are in a position to win the championship.

Rast was emotional in revealing the journey he has been on since the start of 2017, initially unsure of whether he would race in the championship despite dreaming of becoming a DTM driver.

“Im grateful for every victory and race I can do in DTM,” the now two-time champion admitted, “It’s always been a dream to be a part of DTM.

“To celebrate my second title in three years is something I would never have dreamed of.

“Three years ago i wrote off the DTM because I was not in a position to be in the DTM, and now three years later I have two titles, it’s something unbelievable.” 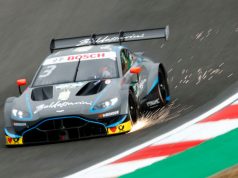