Max Hesse was declared the victor in the TCR Germany season finale, after a thrilling race which saw a near-dead heat with Antti Buri, who crossed the finish line in first but was almost immediately then penalised and demoted to third.

Series newcomer Philipp Regensperger started the reverse-grid race from pole position, but was immediately passed by Marcel Fugel’s FK2 Honda Civic at the start, with the young German leading the first two laps ahead of René Münnich.

Max Hesse, from fifth on the grid, then made a bold move to take the lead at Turn 1 on lap three, going between Fugel and Münnich, only for Fugel to tag the Hyundai and re-take the lead.

Hesse did manage to get back into the lead one lap later at the final turn, as Fugel dropped into second, whilst the other title contenders of Harald Proczyk, Mike Halder and Antti Buri had made their way into third, fourth and sixth respectively.

Proczyk took second from Fugel on lap five, with Halder following through into third. By lap six Buri had made his way past Theo Coicaud for fourth, leaving the top four in the championship in the top four positions in the race.

The middle phase of the race saw the top four following within three seconds of each other, and the battle only came alive on the final lap, after a one-lap safety car phase to recover Sophie Hofmann’s CUPRA from the gravel.

Proczyk locked his brakes into Turn 1 on the last lap, allowing Buri to look up the inside for second, with slight contact between the duo sealing the pass.

Buri then also got past Hesse for the lead at the penultimate turn, with the duo running side-by-side to the chequered flag in a photo finish which initially saw Buri win by 0.011 seconds – which would have given the Finn the title on countback of wins, as the duo would have been tied on points.

But Buri was almost immediately handed a post-race one-second penalty for the contact with Proczyk, dropping him to third and giving Hesse the title in controversial circumstances.

Proczyk was thus classified in second, ahead of Buri, giving the Austrian second in the championship standings as well.

Halder was fourth, having gone wide on lap 14 to allow Buri through, ahead of Saturday’s race one winner Dominik Fugel in fifth.

Frenchman Coicaud was sixth in his Team Engstler Hyundai, ahead of the best CUPRA of TOPCAR Sport’s Julien Apothéloz in seventh.

Pascal Eberle made his way up to eighth towards the end of the race, whilst the top ten was completed by the Volkswagen of Mitchell Cheah and the Honda of Marcel Fugel. 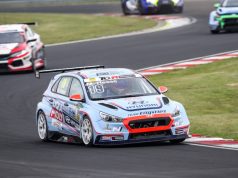