AmD Tuning’s Sam Tordoff says he was “amazed” at the lap times of front-row starters Tom Ingram and Dan Cammish, given he lines up third despite being almost three tenths adrift of their fastest times.

Practice pacesetter Dan Cammish had led most of the half-hour session before Tom Ingram gave the Toyota Corolla a maiden pole position by just two thousandths of a second.

Tordoff heads the second row in his FK2 Honda Civic Type R, but was 0.284s adrift of Ingram’s benchmark, and told TouringCars.Net he was “amazed” at just how quick they went.

“We were very happy with that, the lap time was very good,” said Tordoff.

“Tom [Ingram] and Dan [Cammish] produced unbelievable lap times and I was amazed that I did that lap time and I was still three tenths off.

“But it is what it is. We’re happy with what we did, and it’s set us up nicely for today now.”

With a unique tyre setup for Snetterton, all drivers have the choice to run the mandatory soft, medium or hard compound in whichever order they choose across today’s trio of races.

Tordoff has opted to go for the soft tyre in the opening race due to his positive starting position and running no weight.

“It makes sense whilst we’ve got no weight and a good starting position – it seems like the right thing to do,” he explained.

“We think most people will do soft, medium, hard. That’s what we’re expecting unless of course you’ve had a terrible qualifying in which case you may get the hard out of the way.

After enduring a torrid start to the opening half of his 2019 campaign, Tordoff feels he has “nothing to lose” in the second half of the year.

Despite the confidence, he admitted he does not have as much transferrable from the in-season tyre test as he would like as the circuit has evolved to now be two seconds quicker.

“The track’s now two seconds faster than it was at the test, and everything that we got at the test when the track was low grip wasn’t necessarily working yesterday,” Tordoff said.

“Just because of the track evolution really. We learnt a lot about what to do around a non-grippy Snetterton but we’ve come here and it’s hugely grippier.

“But that’s the same for everyone. We’ve just got to manage it today. The tyre situation is obviously going to come into play a lot.

“We’ve got to think about strategy and just really take the least risk we can at each point.” 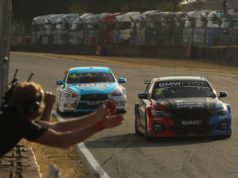