BMW Team RMG’s Marco Wittmann stormed to his fourth DTM race win of the season in race one at Brands Hatch, but the two-time series champion didn’t have an easy run to the checkered flag.

At the start, the pole-sitting Wittmann was beaten to Paddock Hill Bend by R-Motorsport’s Aston Martin who started in fourth place. The Scottish driver was later given a five second stop-go penalty for jumping the start, and Wittmann admits he struggled off the line.

“The right hand side was a bit more wet than the left,” explained the BMW driver, “My start was not too bad, I think only Paul had a huge jump and overtook us all.”

Wittmann was then looking for a way past the Aston Martin Vantage for the opening few laps, but praised the British marque for leading a race on merit.

“I have to say for DTM and for Aston Martin I felt really happy that an Aston Martin was leading the race by themselves,” revealed the race-winner.

Despite looking like he was in the quicker car, Wittmann looked unable to find a way past Di Resta on-track, and told TouringCars.net that it is difficult to follow round the Brands Hatch ‘GP’ layout. Eventually the BMW pitted in order to avoid being undercut by the drivers behind.

“It’s definitely more difficult to follow the cars,” he explained, “especially at the high speed tracks, and especially through sector two here in the forest.

“I tried to put him under pressure for some laps and I had one or two occasions where I was quite close before Turn 5 (Hawthorns Bend), but it was not enough to make a safe move.

“In the end we decided to stop a bit earlier to undercut him and also not get undercut by the others.

“It was a race against René [Rast], Loïc [Duval] and Paul, but after the pitstop we had strong performance, making a gap to the competition to finish the race with a win.”

In the final five minutes Wittmann then came under threat from Audi Sport Team Rosberg’s René Rast who had surplus use of push-to-pass and DRS in comparison to the race leader.

“These guys can use DRS and push-to-pass, as I was the leader I didn’t have this opportunity.

“Lap time-wise it’s maybe worth five tenths here,” described the BMW driver, “My tyres were kind of at the end, but I knew the race goes three or four more laps, and I just bring it home.” 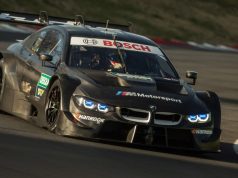