Hyundai has been rumoured to be developing an E-TCR car for the forthcoming all-electric series, with the brand’s Motorsport division confirming on Tuesday that it will reveal its first all-electric racing project in September.

TouringCars.Net understands that the South Korean company, with its motorsport division headquartered in Germany, has been working on a behind-the-scenes electric touring car project to join CUPRA in the new TCR series in 2020.

Whilst the firm has not yet revealed the nature of its electric project, it has released limited information today (Tuesday 6 August) confirming that the full programme will be revealed at the International Motor Show Germany on September 12 – 22.

In a statement, Hyundai Motorsport said that “the car, which has been designed and built at the company’s headquarters in Alzenau, Germany, will break cover for the first time on the media day of the International Motor Show (IAA) in Frankfurt in September.”

A teaser video was posted to the official Hyundai Motorsport Facebook page on Tuesday.

The statement continued: “Mirroring the move towards hybrid technology and electrification in the automotive industry, motorsport has also ventured into new territory in recent years with the introduction of electric and hybrid series and regulations.

“This exciting new chapter promises to showcase Hyundai’s high-performance capabilities, its green technology credentials and its unwavering passion for motorsport.”

Hyundai Motorsport Team Director Andrea Adam called the project a ‘new era’ for the division, which has enjoyed significant success in both TCR and the World Rally Championship in recent years.

“A new era is dawning at Hyundai Motorsport,” said Adamo. “For many months, our team in Alzenau has been working hard on an exciting electric vehicle and soon we will be able to share the fruits of these labours.

“It promises to be a new chapter for our company, a natural extension to our motorsport activities, one that links closely to the current trends and innovations in the wider automotive industry.

“There’s not much longer to wait; all will be revealed at the IAA in Frankfurt in early September.” 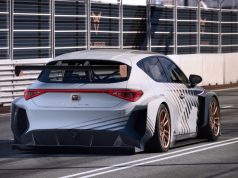