Home DTM Race one winner René Rast thought his ‘race was over’ after start...

Audi Sport Team Rosberg’s René Rast pulled off one of the most unexpected DTM race victories after stalling at the start of race one at the Norisring.

The stranded Rast dropped from third to last place as the field came flying by, but some quick thinking enabled him to rejoin the pack on the first lap.

Throughout the 2019 season so far, Rast has called the start procedure in the new Class One specification DTM cars a ‘lottery’, and it seemed today his numbers were not drawn.

“I stalled the car,” the 2017 champion admitted, “I was a bit too aggressive, too little throttle application and too aggressive clutch release.

“I was standing there just waiting or everybody to pass me and then I started it again.

“I thought the race was over, I was last before the first corner.”

The Audi driver then pitted early in the hope an off-piste strategy might help him climb up the order. Then, only a couple of laps later Rast benefitted from an early race safety car, which was called to help recover the abandoned Audi Sport Team WRT car of Pietro Fittipaldi.

“We knew there was a risk of the safety car because of who was stopped on the left hand side, we decided to pit.

“Just when I pitted the safety car came out. It was perfect timing, I was a bit lucky with that.”

At the restart, Rast was in tenth and was the highest placed driver who had made their mandatory stop. With his eyes firmly locked on the race leader Audi Sport Team Abt Sportline’s Nico Müller, Rast started to believe a race win was possible.

“I knew I was the first in line who had pitted, I knew I had to stay out of trouble.

“I tried to be defensive, I knew Nico was my rival on track and I could always see him.”

As those in front headed for pit lane, Rast inherited the lead with half the race to go, and streaked away to lead by over 30 seconds at the line, the largest ever DTM victory margin at the Norisring. 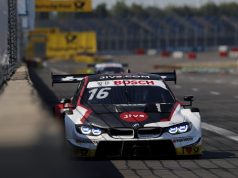