Henry Neal and James Turkington shared victories in the Touring Car Trophy races at Brands Hatch, with Turkington taking a double win in TCR UK as a result and sealing a perfect points score.

Stewart Lines, also returning to the grid, lined up third in his CUPRA for race one, ahead of Turkington’s CUPRA, whilst erstwhile points leader Lewis Kent qualified his Hyundai in fifth.

Pole-sitter Halstead led into the first turn, as behind him Turkington moved into second with a strong start to jump from fourth on the grid to second by the second corner.

Turkington then made his move on Halstead for the lead at Druids on lap three, getting his CUPRA into the lead with slight contact as Halstead refused to lose his lead easily.

Neal then took second from Halstead two laps later, with the NGTC Honda driver setting about closing down Turkington’s then near one-second lead.

Turkington held on to the lead for seven laps before the Northern Irishman went wide at Clearways on lap ten, allowing Neal to slip up the inside and into the lead.

There was little action after that in the race, aside from Kent taking fourth from Lines on lap 13. Neal went on to secure the win, ahead of Turkington and Halstead.

Kent lost fourth to Lines on lap 27, before also losing out to Alex Day’s Audi on the drag to the line on the final lap, leaving the Hyundai driver in sixth in the race and giving Day a late fifth.

Darelle Wilson finished the race two laps down after making a pit stop at the mid-stage in his Vauxhall Astra.

Kent again made a poor start and went through the gravel and grass on the opening lap to drop to the tail of the field, whilst at the front of the field Turkington got the jump on pole-sitter Neal to take the lead at the first corner.

A feisty Kent passed Halstead for third on lap ten, but his progress would end there and he crossed the line behind Neal.

However, the Team Dynamics driver was given a five second penalty for exceeding track limits, handing Kent second behind eventual winner Turkington, with Neal slipping to third, ahead of Day in fourth.

Halstead was also given a five second penalty for the same reason, meaning Lines claimed fifth, with the Honda driver ultimately classified in sixth.

Again, all seven drivers finished the race, with Wilson a distant seventh.

Turkington leaves Brands Hatch with the series lead on 136 points, ahead of Kent on 117. The next TCR UK round takes place at Donington Park on October 19 – 20. 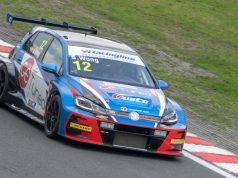