Chris Smiley blasted Ash Sutton for the move that took him out of the second British Touring Car Championship race at Croft, with the BTC Racing driver finishing last after contact on the final lap.

Smiley had been running in fifth until the final lap of the racer, when Sutton made contact with the rear of the Honda going through the complex at the end of the lap.

The contact pitched the Northern Irishman off the road, and by the time he had rejoined the circuit he was in last place – also denying him a strong starting position for the final race of the day.

Smiley placed blame for the incident firmly with Sutton, who had been pressuring the Honda driver after passing Tom Chilton three laps earlier.

“I don’t need to speak to him – whoever controls and looks after all that stuff needs to speak to him, not me, it’s not my job,” said Smiley to TouringCars.Net. “I’m only here to race, I’m not here to look after other drivers.

“That was a really good drive with almost full ballast on. I did defend, but it wasn’t over defensive. I think I defended very wisely.

“Where the car was strong I used it, and where it was weak I made it around and I made the car a bit wider. I think overall it wasn’t overly defensive.

“Three laps before he had done exactly the same thing on the other side; he had just rammed into the back of me and sent me on. He knew he was guilty so he slowed down and let me continue on.”

Smiley missed out on a strong starting positing for the reverse-grid final race as a result, where he would have been fifth if he had taken the chequered flag in fifth in race two.

“It’s just disappointing. If we had finished fifth or sixth it wouldn’t really have mattered, it wasn’t really important. To take somebody out to gain one position with a corner of a lap to go is stupidity.

“We would have been fifth [on the reverse grid] and we could have finished there and survived, take more points. It’s just disappointing.

“We want to get up as far as we can [in race three]. The second half of the field are quite slow, so I’m hoping that I can pick my way through without doing anything stupid.”

Sutton was deemed to be at fault for the clash by the stewards and was handed a five-place grid penalty for the incident. 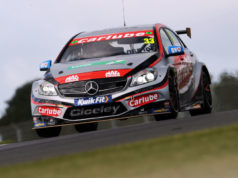 Adam Morgan: ‘The car feels so much better than last year’ 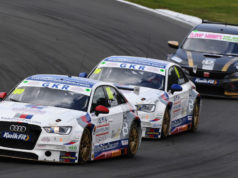 James Gornall: ‘I’ve enjoyed getting my elbows out this weekend’ 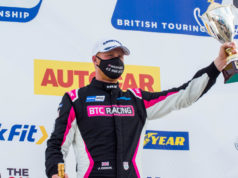