After a controversial qualifying session, in which the Lynk & Co cars posted the four fastest times but were then hit with an immediate Balance of Performance change afterwards, the tension was high ahead of the first race in The Netherlands.

All four of the Cyan Racing blue cars had their power reduced back down to 97.5% ahead of the race, whilst being given a 10 kg weight reduction, putting their BoP level back to how it was in Slovakia.

At the start Björk pulled away cleanly from Muller, whilst behind Azcona got his CUPRA ahead of Andy Priaulx’s Lynk & Co, moving the Spaniard into third.

Björk was then able to ease to a second win of the year, despite team-mate Muller going onto his radio halfway through the race to urge them to tell the Swede to ‘hurry up’ as Azcona kept the pressure on.

In the end Azcona made no serious attempts to pass Muller and followed the Frenchman home to take his second podium of the season, moving the Spaniard up to fifth overall in the drivers’ standings.

Johan Kristoffersson finished the race as the top Volkswagen driver in fourth after the SLR driver got past Priaulx on the final lap, leaving the Brit to settle for fifth – equalling his best result of the year.

SLR’s Mehdi Bennani jumped two places to end the opening lap in sixth, with the VW driver remaining there for the rest of the race.

Yann Ehrlacher finished in seventh, the Cyan Racing driver having received a grid penalty after qualifying for blocking, leaving him to battle up through the field. Ehrlacher made up two places from the grid, but the Lynk & Co driver was unable to progress any further thereafter.

The biggest loser on the opening lap was SLR’s Benjamin Leuchter, who dropped from fifth to eighth, but the German nonetheless recorded his best-ever WTCR result.

Completing the top ten were the leading Audi of Frédéric Vervisch and the best Hyundai of Nicky Catsburg, in a difficult race for both marques.

In the battle for the championship, erstwhile points leader Néstor Girolami fought to 15th and a single point, whilst his Münnich Motorsport team-mate Esteban Guerrieri took the chequered flag in 12th and moved to one point clear of his compatriot.

BRC Racing’s Augusto Farfus retired to the pits after six laps with a broken front splitter, whilst Rob Huff stopped after eight laps when engine problems continued with his Volkswagen, the Brit opting not to push the car too hard after an engine change ahead of the race.

A difficult race for Hyundai also Norbert Michelisz making a pit stop on lap five, with the Hungarian reporting vibrations on his car which caused him to drop seven places in a single lap on the previous tour, whilst running in 13th. 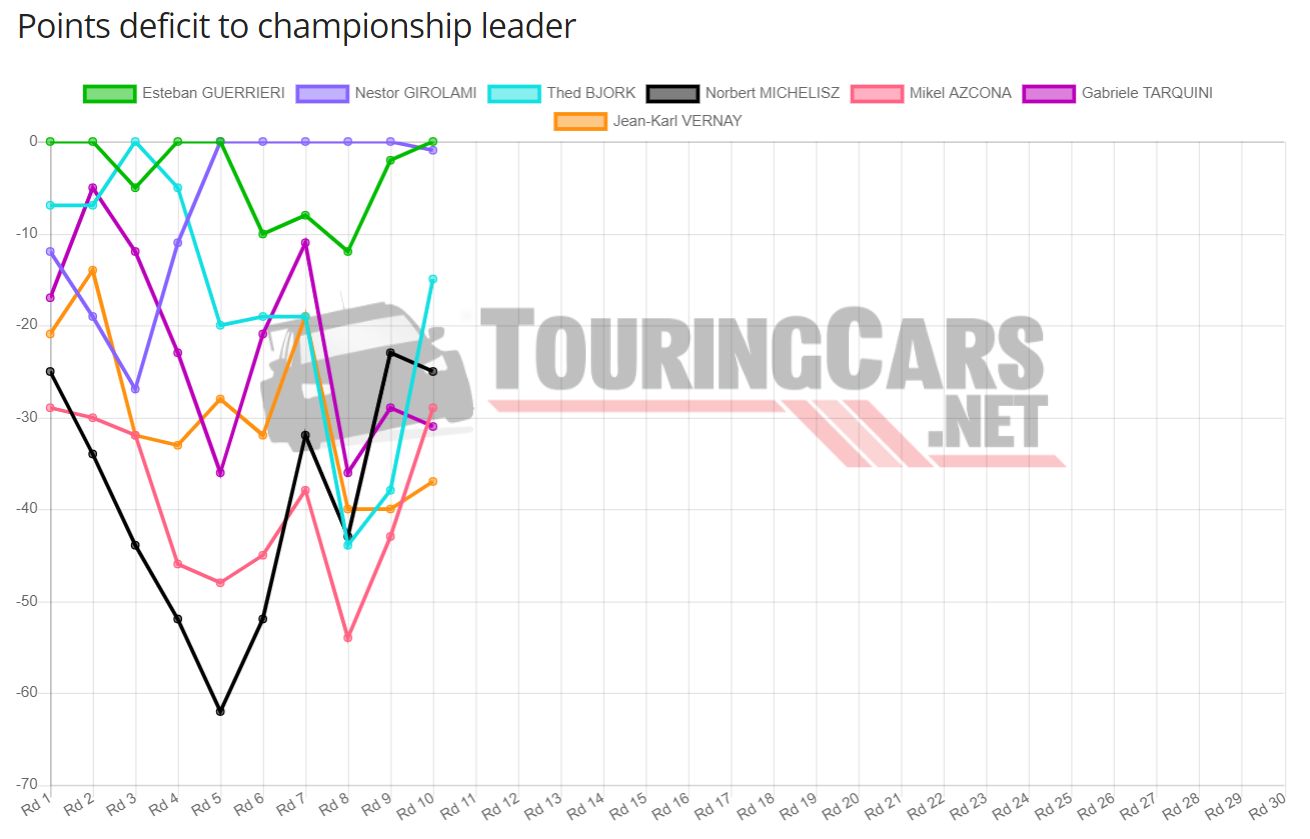