Frédéric Vervisch scored Audi’s first FIA World Touring Car Cup win of the season in race one at the Slovakiaring, coming from ninth on the grid to win the race ahead of Team Mulsanne’s Ma Qing Hua.

The race started on a drying track, with all of the field beginning on slick tyres in difficult conditions.

Pole-sitter Nicky Catsburg lost out to Ma at the first corner, dropping to sixth on the opening lap as he struggled for grip on a circuit with numerous damp patches.

Vervisch, meanwhile, made a strong start and made up a handful of positions at Turn 4 to end the opening lap in second behind Ma’s Alfa Romeo.

The incident removed both drivers from the race and required a two-lap safety car period for the cars to be recovered from the gravel, with the second Team Mulsanne car of Kevin Ceccon also going off into the gravel on the first lap.

When racing resumed on lap four, Vervisch immediately applied pressure to Ma, and the Belgian eventually got past the Chinese driver one lap later at Turn 3 as the Audi demonstrated superior pace.

Thereafter Vervisch was unchallenged by Ma for the win, allowing the 32-year-old to claim his first win of the year, moving him up to sixth in the drivers’ standings.

Ma scored his first podium finish of the year, whilst BRC Racing’s Norbert Michelisz completed the podium, the Hyundai driver having got past Catsburg on the opening lap to hold third thereafter.

WRT’s Jean-Karl Vernay was fourth, despite contact from behind at Turn 3 on the first lap, ahead of the BRC Hyundai of Augusto Farfus in fifth.

The Brazilian had been eighth on the first lap, but charged forwards on lap seven when he got past Catsburg, before also passing the struggling CUPRA of PWR Racing’s Daniel Haglöf on the following lap.

Reigning champion Gabriele Tarquini was sixth, coming through from 18th on the grid after his grid penalty, carried over from Hungary, was applied before the race.

Catsburg eventually finished seventh in his damaged Hyundai, ahead of the Comtoyou Racing CUPRA of Tom Coronel in eighth, the Dutchman having slipped back on the first lap of the race.

PWR Racing’s Mikel Azcona and the wildcard Hyundai of Luca Engstler completed the top ten, the latter coming from 20th on the grid despite having the heaviest car in the field.

Yvan Muller was the best of the Lynk & Co contingent in 11th, just ahead of WRT’s Gordon Shedden in 12th, the Scot performing a superb defensive move on lap ten when under pressure from the CUPRA of Aurélien Panis.

The situation unravelled two corners later for Panis when he was hit at Turn 3 by SLR’s Mehdi Bennani, who locked his brakes and careered into the side of the Frenchman, eliminating both drivers from the race.

Having run as high as fifth, Haglöf could only manage 19th at the end as the Swede was pushed off line and unable to defend his position when he started to slip back. 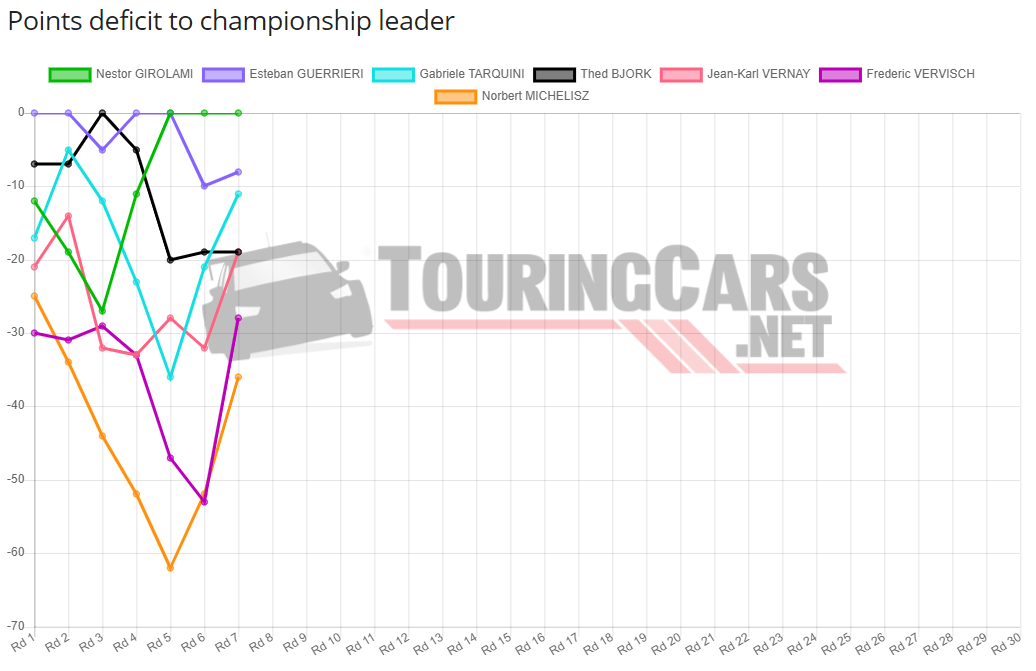