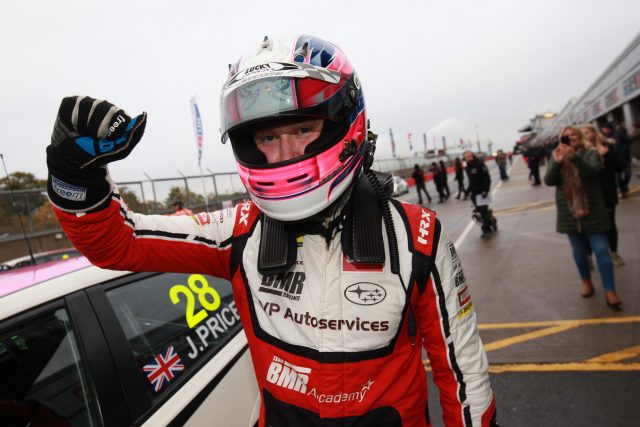 Josh Price says that winning the season finale of the TCR UK series means he has ‘ended the year on a high’ after he took victory by the biggest winning margin of any driver all year.

Price took a dominant lights-to-flag victory in the last race of the weekend at Donington Park, following up a disappointing race one retirement due to a mechanical issue with the perfect result in race two.

For the 19-year-old it marked the perfect end to an up-and-down season, with Price having contested selected TCR UK events whilst also only completing half a season in the BTCC before ending his campaign there at the mid-point of the year.

“If I was going to win a race then that was the best way to win it! It was from the get-go; we knew earlier [that we had the pace], even when we had to start from the back row for race one, but we kept breaking down and we eventually broke down. It’s good to end the year on a high and in the way we have.

“We’ve had a really hard couple of seasons. From when we left karting to Clios we were on the up, but then in the last two years, for one way or another whether due to breakdowns or learning, it’s kind of all come at once and its affected everyone. It’s nice to get everything back together again, with a fast car and win a race, especially by such a big margin.

Price also admitted a step up to TCR Europe is an option as he evaluates programmes ahead of 2019.

“I’d like to do TCR Europe and that is one of the options we’re looking at for next year, but it’s just dependent on budget, sponsors, what team and how much testing. There’s loads of factors we’ve got to throw in.”

He also paid tribute to TCR UK’s organisation, and believes off-circuit the team operate on a par with their BTCC counterparts.

“The organisation, from when I first did a race at Knockhill to now, is a lot better. The organisation of the series is now on a par with British Touring Cars. From that aspect, I’m sure it would be OK to do it in 2019. The car’s are similarly paced to British Touring Cars, it’s a quarter of the price and there’s less manpower required to run them. It’s a good platform to be in if you want to be doing touring cars. It’s easy to get a car out of the box, race, and be somewhere near the guys who are in teams like we are. It is a really great stepping stone in motor racing and for touring cars.

“We haven’t got anything planned at the end of this year, so that’s probably us done bar a couple of test days. We’ve got to have some chats to see what we want to do next year, and hopefully get something underway at the back end of this year. TCR wouldn’t be a bad option.”