Langeveld was in control of the race throughout, mastering both the standing start and the rolling restart which was required after a two-lap safety car intervention.

Buri never had much of a challenge to the leading Dutchman, having to settle for second to make it an Audi 1-2 at the head of the field.

Leuchter took third after getting past Harald Proczyk for the final podium position on lap eight when the HP Racing driver went too deep into the Turn 2 hairpin, opening the door for Leuchter and also Team Honda ADAC Sachsen’s Mike Halder.

That mistake gave Halder fourth and a position he would hold on to for the rest of the race, leaving the Opel of Proczyk to take the chequered flag in fifth.

Prosport Performance’s Max Hesse, who had started from third on the grid, finished in eighth after a poor start dropped him down the order on the opening lap.

The two-lap safety car intervention was needed when the Peugeot of Lukas Niedertscheider and the opel of newcomer David Davidovac came together on lap two, with Niedertscheider initially diving up the inside at Turn 8 before Davidovac then lost control of his car approaching Turn 9, collecting Niedertscheider’s car in the process.

Engstler Motorsport’s Justin Häußermann also retired from the race early on after stopping on lap two.

Victory for Langeveld draws him level with Proczyk at the head of the championship standings, with both drivers on 145 points ahead of third-placed Engstler on 130. 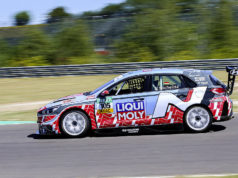 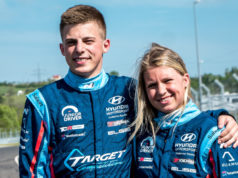