Honda racer Josh Files says he believes that the Balance of Performance [BoP] applied to the marque’s main TCR rival Hyundai is ‘a bit too harsh’, with the Korean cars having a significantly higher ride height than any other.

Ahead of the second TCR Europe meeting at Zandvoort, which is also hosting the fourth event of the FIA World Touring Car Cup (WTCR), the ride height of the Hyundai cars was raised to 100 mm and the engine power restricted to 97.5%.

But Files, who races a Honda Civic for KCMG, believes that the BoP measures have gone too far against the Hyundais, even though he was still outpaced by four of the i30 N cars when TouringCars.Net spoke with him after practice.

“They’ve obviously evaluated stuff with information they have that we don’t know of and made a decision to raise the ride height of the Hyundai, which I actually believe is a little bit too much,” said Files. “I think it’s a bit too harsh a penalty for them to be truthful.

“I’m not quite sure why the Hondas have 20 kg, because that doesn’t make any sense either. The fact that the VAG [Volkswagen-Audi] Group cars have dropped weight seems to have swung things the VAG Group way, so I’m not quite sure on that.

“If they had just left us alone, I would have said it [the BoP] was pretty decent. But they have more information than me and at the end of the day it is what it is, and I have no influence on it – I can’t think about it too much.”

The two-time TCR Germany champion is expecting to have strong form in the races on Sunday and Monday, for which he has qualified in seventh (representing fourth on the reverse grid for race two).

“Even here in the speed traps we’re still 5 kph down, but it’s only one long straight and the rest of it is quite tight and twisty. We have got a very good chassis, so I’m quite confident.”

Files is one of a handful of drivers in the TCR Europe paddock who has previous experience of racing on the Zandvoort circuit since it was resurfaced in 2017, but he doesn’t expect that to be a significant advantage due to having to learn other new elements.

“I raced here [with the new surface] last year. The new thing to me is the car and the tyre, so it’s completely different and we have a different philosophy on setup as well.

“We’re still learning, and the only thing I can say is that I do have some track knowledge.” 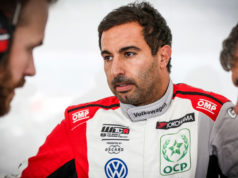