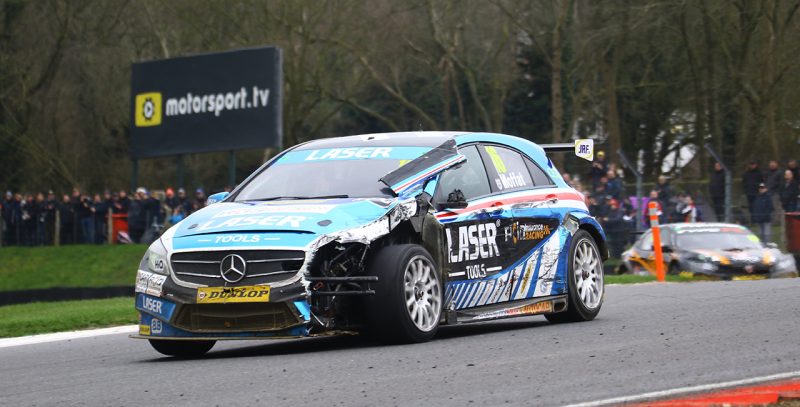 Laser Tools Racing’s Aiden Moffat is hoping to convert the potential showed last time out at Brands Hatch into solid points this weekend at Donington Park.

The Scotsman came very close to scoring his third BTCC win in a frantic race two at the season opener, before contact with the Vauxhall of eventual winner Senna Proctor meant he sustained damage and would finish fifth.

After the race, Moffat commented: “It feels like that was a win I had taken away. I was defending well and he made a mistake and just gave me a little push but in these conditions it had serious consequences.

“I think everyone saw the incident on ITV4’s coverage so they know that it wasn’t my mistake but while fifth sounds OK as a result, I know that it should have been a win.”

The two-time BTCC race winner was running strongly in the final race before contact with Mike Bushell’s Volkswagen CC caused right-rear suspension damage, knocking the tracking out on his Mercedes-Benz A-Class.

“That damaged the right rear corner and the car just wouldn’t drive in a straight line after that,” said Moffat.

“Again, it makes you wonder what might have been, because I was confident that if I defended the race would come to me, but I never got that chance.

“However, we left Brands Hatch having proved the car is fast and that I can race at the front, defend when leading and not make mistakes under pressure, but we could have had one, maybe two wins.”

Despite the frustration of the Brands Hatch meeting, Moffat is keen to repeat his win at Leicestershire’s Donington Park this weekend, as he did in the opening race last year.

“Now we have regrouped for Donington Park, and this is one of my favourite tracks.

“We’ve been practicing our race starts and that has really paid off. I’m very confident in the car and both the team and I are really looking forward to positive results this coming weekend.”