Engstler was a mere 0.015 seconds faster than the Malaysian racer, who had earlier been second fastest to his other team-mate Diego Moran in Q1.

In the end, it was young German Engstler who secured the pole position, with Cheah beating Moran in the all-important Q2, as Engstler Motorsport drivers locked out the top three positions on the grid.

Maximum Racing’s Lo Sze Ho was fourth fastest in his 2017-spec Honda Civic, heading up a quintet of five Honda drivers in a row. 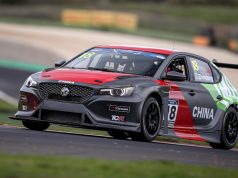