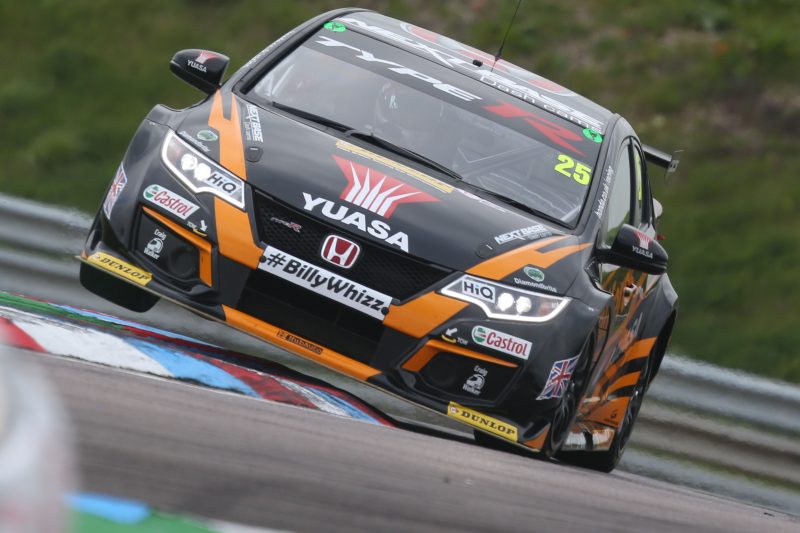 Matt Neal led home Gordon Shedden in a Honda 1-2 during the opening British Touring Car Championship race at Thruxton, and in doing so secured his 60th career victory.

The win, his first of the 2017 season, also moves him into second in the all-time victory stakes, level with Andy Rouse and behind rival Jason Plato.

Gordon Shedden, laden with the maximum quota of success ballast, elected to act as rear-gunner for his team-mate and duly took second, with Jack Goff claiming his first podium for Eurotech Racing in third.

Tom Ingram was forced to settle for fourth despite a late turn of pace in the Toyota Avensis, with Adam Morgan fifth in the Mercedes A-Class.

The two leaders made a level start around the challenging 2.3 mile Hampshire circuit, with Neal stretching a slight advantage as his team-mate covered off the threat behind from Goff.

Jake Hill and Josh Cook became the races only retirements shortly after the start, making contact on the exit of Seagrave. Cook spun dramatically towards the barriers but avoided harm, aside from his rear-left damage, whilst Hill was forced to park up alongside with his own wounds from the contact.

Morgan and Sutton provided a large portion of the drama up front, the former squeezing past Austin around the outside at Campbell whilst Sutton claimed sixth from the fast-starting Turkington at Church. Mat Jackson followed the Levorg GT through.

Turkington’s retribution would prove opportunistic, with Jackson’s challenge on Austin at Seagrave allowing the BMW 125i M Sport to slide underneath the duo for seventh.

Andrew Jordan spun in an attempt to pass Smith at the Complex, his sideways BMW holding up Tom Chilton and allowing Aiden Moffat to pass both.

Any late race drama was largely neutralised by Ant Whorton-Eales, with the Audi S3 taking several laps to finally concede to the leaders in turn and go a lap down.

The result sees both Honda drivers close to gap to standings leader Tom Ingram. Matt Neal will start the second race from pole position later this afternoon at 14:32 BST.