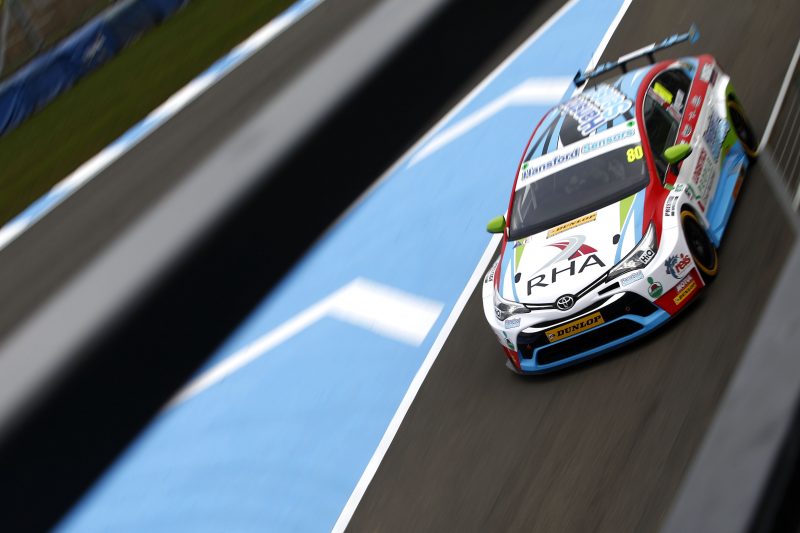 Tom Ingram topped the timesheets once again in the second British Touring Car Championship practice session of the weekend at Brands Hatch ahead of Adam Morgan and Jack Goff.

Ingram, fastest in the morning session, clocked a fastest lap of 48.158 seconds in the Toyota Avensis to narrowly edge out Morgan’s Mercedes A-Class by 0.086 seconds, with Goff a further five thousandths of a second back.

The three rising independent stars took turns at the top of the timesheets across the session before Ingram made his lap stick during his final run to claim the spoils.

“We’ve still got something left, by no means are we giving it everything we can. It’ll be interesting to see where everybody else is in terms of overall pace as well.” commented Ingram.

Matt Neal posted his first representative running of the morning’s sessions in fourth, with Rob Austin’s Avensis rounding out the top five.

Colin Turkington came next as Team BMW cement the reliability of their new B48 engine unit and look to make some chassis tweaks ahead of qualifying later this afternoon, with the top eight rounded out by the Smiths – Jeff ahead of Aron Taylor-Smith in the MG6 on this occasion.

Senna Proctor earnt the bragging rights among the newcomers in FP2 with 9th in the Vauxhall Astra, nearly four tenths of a second adrift of Ingram.

Several teams are known to have spent practice disguising their true pace and bedding in components; qualifying at 15:40 will provide the first true indicator of where the field stack up heading into tomorrows opening three contests.