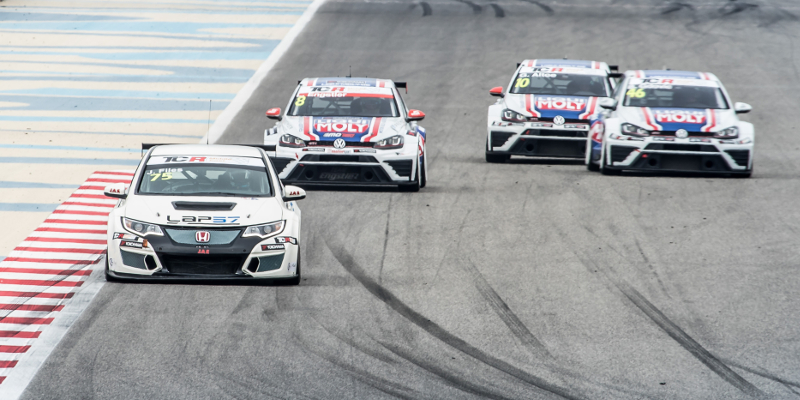 Josh Files sealed the inaugural TCR Middle East title in Bahrain with his second win of the day, against a depleted grid that saw just three cars finish the race.

Files’ victory was his fourth in a row since joining the series’ for the second meeting in Abu Dhabi. It means that the Brit beat American Brandon Gdovic to the title, in a race with just five entries.

Despite the reversed grid putting him at the back, Files got off to a stronger start than everyone else and was in the lead by the first corner, ahead of Mulsanne Racing’s Davit Kajaia.

There was a close duel between Kajaia and Liqui Moly Team Engstler’s Luca Engstler on the opening lap, with the young German coming out ahead of Kajaia by the end of the opening tour.

Engstler’s charge would not last for long, however, as he slowed just a handful of laps later with mechanical issues on his Volkswagen Golf, stopping at the end of the start straight and bringing out a safety car period whilst his car was cleared.

When the race resumed, Kajaia looked to challenge Files, but he soon fell back and ultimately encountered his own technical troubles, dropping down to fourth before retiring to the pits.

That left Gdovic in second, but without the pace to challenge his leading rival, with the third Engstler Motorsport car of Giacomo Altoè finishing in third.

Files therefore takes the drivers’ title, whilst Liqui Moly Team Engstler lift the teams’ trophy by virtue of having entered more cars than any other team.